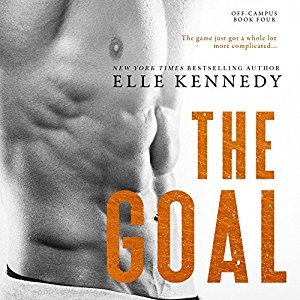 After the pregnancy bombshell delivered at the end of the previous book, The Goal actually goes back a bit in time and begins when Tucker and Sabrina first meet. Readers/listeners relive certain scenes and moments from the The Score, with a new perspective and focus, as well as several new scenes.

Tucker is probably the most likable, easy-going guy we’ve met thus far in Ms. Kennedy’s Off-Campus series. He’s genuine, and while he’s easy on the eyes, he’s not all about scoring with the ladies. When he first lays eyes on Sabrina, he senses she is something special. I adore everything about this guy. He’s nearly perfect and has the patience of a saint. He never takes his eye off the end goal of making Sabrina his, but he allows the ebb and flow of life to take its course along the way.

On the other hand, all we knew about Sabrina before this book is that she is Dean’s educational nemesis, and his perception is that she is a cold-hearted bitch. Ms. Kennedy removes that mantle from Sabrina immediately, by showing us Sabrina’s deplorable home life and the motivations behind her desire to achieve perfection at Briarwood. I fell for Sabrina’s flawed character hard. She’s driven and sometimes too focused, but she has a heart of gold underneath the layers of protection she’s built.

Sabrina and Tucker make a great couple. There is insta-lust and sexual chemistry big time, creating an immediate interest in the pair. I like that they have time to fall a bit for one another before the baby news comes. I also appreciate that there are several ups and downs. It’s very realistic with a happy ending.

While I enjoyed their story, and I’m thankful to finally have Tuck’s book, I was overwhelmed by the amount of focus on the pregnancy/baby storyline. Don’t misunderstand, Ms. Kennedy does an amazing job with the baby storyline; she didn’t sugar coat what it’s like to be pregnant and have a child. She also didn’t minimize the impacts on the parents’ lives and their relationship. However, it’s too much baby for me. I am just not a fan of baby-romances.

Generally, the narration is good; better than book 3, but still not as great as the first two books. The male narrator, who also read The Score, has great drawl and perfect laid-back attitude for Tuck. At times, I felt certain words held too much of a Boston accent, but overall he is consistent. Mr. Eiden does a great job distinguishing between all characters and has a solid feminine voice. Similarly, the female POV narration is good, especially after I sped it up. (I varied between 1.25x and 1.5x.) I enjoyed her voice for Sabrina right from the start. She gives Sabrina a perky, upbeat air, yet is able to add the weight of life into her voice when called for. My biggest complaint is that Ms. Jones had extremely long pauses between dialogue and paragraphs which became annoying right away. Increasing the listening speed helped with that.

Overall, I enjoyed The Goal, and look forward to hopefully more stories in the Off-Campus series. Although there was too much baby storyline for me, and I missed the laugh-out-loud humor and silly moments found the previous three titles, Tucker and Sabrina make a wonderful couple with an entertaining romance.