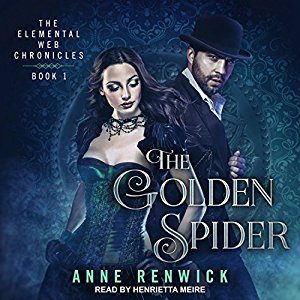 Set in a time when England and Germany have heightened tensions, spy networks are vast, and the ton continues with its balls and social obligations unaware of the secrets around them, Lady Amanda wars with her father, the Duke, over her ability to attend medical school. Amanda is driven by her keen intelligence and a guilt over her brother’s injured leg, to produce a clockwork device to repair nerve damage. Under pressure to find a husband within the year, Amanda courts a classmate, but finds no sparks. However, when her work captures the attention of Lord Thornton, noted physician and neurologist, Lady Amanda finally knows what it is like to have her mind appreciated.

Lord Thornton lives with the guilt over the betrayal of his best friend in his damaged leg that will never heal. As a spy for the Queen herself, he finds Amanda’s work to be the break he needs in a rash of Gypsy murders. However much he is attracted to both her brain and her body, Thornton must keep the relationship professional, especially since he’s not on the market for a wife.

The Golden Spider is a delicious treat for fans of gadgets, science, and steampunk romance! Right from the start, I was drawn into this exciting mystery, trying to discover who is behind the Gypsy murders. Watching Amanda’s mind work to piece the puzzle together is fascinating, and made all the much better as she and Thornton grow closer. I love the science of the story – the author does not brush over Amanda and Thornton’s work, but rather gives listeners the details of both test subjects and gadgets.

While the engineering, science, action, and adventure is completely fascinating, it is the romance between Lord Thornton and Lady Amanda that gives The Golden Spider heart and makes it such a wonderful story. The pair are meant for one another; not only do they share a passion for science and ingenuity, but they are able to openly be themselves with each other. Thornton doesn’t trust easily, but he finds a confidant in Amanda. Working side by side, their passion grows until they finally give into their burning desires.

The story is read by British-born actress Henrietta Meire, who embodies the Regency Steampunk setting perfectly. She modulates her tone to fit both high society snobbery and working class Roma. Her narrator tone is mostly neutral, but seems to be a tad bit softer when expressing Amanda’s POV than Thornton’s. I enjoyed all of her voices, although it took a while for me to warm up to Thornton’s speaking voice, which came off robotic. As I got to know his character, I became accustomed to his unique voice, and it even softened some as he grew closer to Amanda. Ms. Meire also tosses in German and French accents wonderfully.

In the end, I enjoyed devouring The Golden Spider. A wonderful mix of mystery, adventure, steampunk, and romance, the story unfolded at a thrilling pace, building passion and excitement along the way. I cannot wait for the second title, The Silver Skull, to be released in audiobook format.

My Rating: A
Narration: A-

Lady Amanda is tired of having both her intelligence and her work dismissed.

After blackmailing her way into medical school, she catches the eye of her anatomy professor from the moment she walks into his lecture hall. Is he interested in her? Or only her invention–a clockwork spider that can spin artificial nerves?

Lord Thornton, a prominent neurobiologist, has been betrayed.

Secret government technology has been stolen from his laboratory, and a foreign spy is attempting to perfect it via a grisly procedure… using gypsies as test subjects. The last thing he needs is the distraction of a beautiful–and brilliant–new student, even if her spider could heal a deteriorating personal injury.

Until her device is stolen and used in the latest murder.

Lord Thornton has no option but to bring her into his laboratory as well as the investigation where they must fight their growing, yet forbidden, attraction. Bodies accumulate and fragile bonds are tested as they race across London, trying to catch the spy before it’s too late.