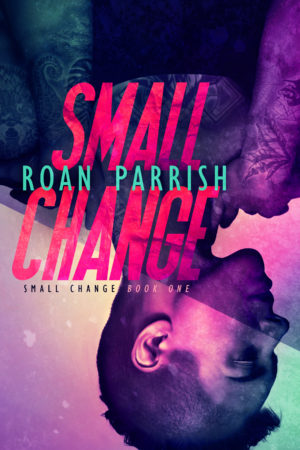 Having first met Ginger in In the Middle of Somewhere I was very happy to see her get her own story. Small Change follows a parallel timeline, but to say that it is the same narrative from a different perspective would simply be untrue. Titled after the name of her tattoo shop—which is itself named after a Tom Waits album and song—Small Change introduces readers to Ginger’s world, and all the wonderful characters in it, amid a significant upheaval. The absence of her best friend, changes at the shop, and the addition of someone she’s beginning to care for (despite her reluctance to believe the truth of it) all have her off balance, but it’s precisely this unsteadiness that made Ginger seem more substantial and genuine than a lot of other characters I’ve read.

Something that I particularly enjoyed about Small Change is that Ginger and Christopher’s dance towards one another raises some excellent questions that I think many will find familiar in some way. Can she be honest with herself? How much of herself will Ginger lose if she lets Christopher into her heart? If the hurts that have toughened her are flung outward in defense when someone gets too close, who else might she hurt, in turn? Ginger has spent so long fighting for everything she has—and then having to guard it against anyone who would negate those accomplishments—that she is understandably terrified about what loving Christopher could mean.

Interestingly, we get to know Christopher not only by his interactions with Ginger, but through his emails to his brother, Jude. Most of the narrative is strictly from Ginger’s first person point of view, but these one-sided messages are extremely telling, and allow the reader to understand Christopher by the complexity of devotion evidenced within them. They are filled with love, hope, sadness, anger, and even loneliness, proving that he truly is as good as he seems. I also thought it especially appropriate that Ginger must face her hardest truths via Jude—who I found absolutely fascinating.

Ginger identifies as queer and has dated both men and women to varying degrees of success, and I loved that there wasn’t any drama about the fact on Christopher’s part—or the story as a whole, come to that. Though the tattoo shop owes its current uptick in business to the publicity it received for being “queer-friendly” as well as being owned by a woman, it stands on the merit of the artists who live and/or work there, and Ginger is a fighter and an artist of the highest order. She’s earned both her positive reputation and her cynicism, but I truly did appreciate seeing her navigate the possibilities of her own happiness.

Ginger was always one of my favorite characters in the previous series, and Small Change reaffirms all those reasons, and even adds to them considerably. It is also an as well-conceived bridge between the two series as I could possibly have hoped for. Roan Parrish has not only created a main character that was easy to become invested in, but has surrounded her with plenty of other exceptional personalities that will, no doubt, continue to bring me back for every story that’s to come. Far from being a light and fluffy read, however, Small Change explores some decidedly relevant issues without flinching or minimizing the shadow they cast in the novel, as well as the world outside of it. Overall, I highly recommend all the related stories, and—given the rumors about the next pairing, especially—am eager to follow along for the duration of the series.

Ginger Holtzman has fought for everything she’s ever had—the success of her tattoo shop, respect in the industry, her upcoming art show. Tough and independent, she has taking-no-crap down to an art form. Good thing too, since keeping her shop afloat, taking care of her friends, and scrambling to finish her paintings doesn’t leave time for anything else. Which … is for the best, because then she doesn’t notice how lonely she is. She’ll get through it all on her own, just like she always does.

Christopher Lucen opened a coffee and sandwich joint in South Philly because he wanted to be part of a community after years of running from place to place, searching for something he could never quite name. Now, he relishes the familiarity of knowing what his customers want, and giving it to them. But what he really wants now is love.

When they meet, Christopher is smitten, but Ginger … isn’t quite so sure. Christopher’s gorgeous, and kind, and their opposites-attract chemistry is off the charts. But hot sex is one thing—truly falling for someone? Terrifying. When her world starts to crumble around her, Ginger has to face the fact that this fight can only be won by being vulnerable—this fight, she can’t win on her own. 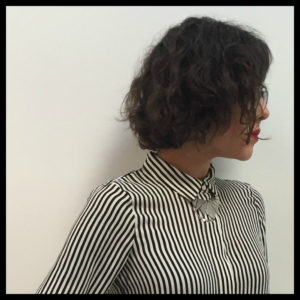 Roan Parrish lives in Philadelphia where she is gradually attempting to write love stories in every genre.

When not writing, she can usually be found cutting her friends’ hair, meandering through whatever city she’s in while listening to torch songs and melodic death metal, or cooking overly elaborate meals. She loves bonfires, winter beaches, minor chord harmonies, and self-tattooing. One time she may or may not have baked a six-layer chocolate cake and then thrown it out the window in a fit of pique.

She is represented by Courtney Miller-Callihan of Handspun Literary Agency.

“I can always count on Roan Parrish to deliver emotional truths and gritty realism. Like many readers, I was waiting for Ginger’s story. And what a story it was!” — Sarina Bowen, USA Today Bestselling author of Goodbye Paradise

“It sounds anemic to say, ‘You will fall in love with Ginger,’ but you will! This tattoo artist heroine manages to be both a delight and a total badass at the same time. Parrish makes her characters work for their happily ever after, which means Small Change has it all: vulnerability and great big leaps of faith, broken hearts and patched-together hearts the stronger for that patching. (Also: smashing the patriarchy and amazing sandwiches.)” –Jenny Holiday, USA Today Bestselling author