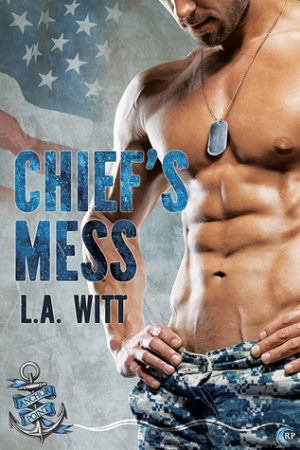 While he was happy to provide some moral support during his sister’s peace-making visit with her ex-husband and his new boyfriend, what Anthony Talbot really wants is a night of no-strings sex with a hot stranger. Luckily, the sexy chief master-at-arms who takes him home clearly agrees. Noah Jackson quickly gets under Anthony’s skin, however, and their increasingly frequent hookups soon turn into a long-distance relationship that leaves both men hungry for more. But, Noah’s hiding a problem he doesn’t even realize he has, and it’s the one thing that Anthony may not be able to forgive.

While the previous story in the series, Afraid to Fly, also dealt with alcoholism, Chief’s Mess is an examination of the denial and consequences of the situation as they’re happening, rather than the aftermath. Here, the reader is witness to the chain of events as Noah’s life begins to fall apart around him. The dual perspectives also cast Anthony’s own feelings in a stark light as they shift from happiness and optimism to fear and pain as the narrative evolves.

One thing I especially liked about Chief’s Mess is that it’s not a hearts and flowers kind of romance out of the gate. Noah and Anthony’s story begins with a hookup and grows into something more over time. The initial attraction is purely physical, and I thought the uncomplicated necessity of that beginning worked really well. Their sexual compatibility is evident from the start, the long-distance relationship they slip into providing ample opportunity for the anticipation between them with to build. Sadly, it is precisely that distance, both emotionally and geographically, that allowed the truth to be ignored and hidden so easily.

At its heart, Chief’s Mess is about honesty and forgiveness—good lessons to keep in mind regardless of the specifics involved. That Anthony and Noah are a good match for one another is evident from their earliest meeting, and wish I could have seen even more of their interactions outside of the bedroom as the story progressed. Watching their connection falter was hard at times, some of the worst moments being downright painful, especially knowing that things would become more difficult before they could get better. Even though I missed the first of the Anchor Point stories, I’ve enjoyed the two I have read a great deal, and would recommend the series to any fan of the genre.

Anthony Talbot is in Anchor Point to visit family, but after two days of strife, he needs a break. A local gay bar is calling his name.

When Chief Noah Jackson sees that red head stroll into the club, he immediately wants him. They’re perfectly matched, and before long, they’re burning up the sheets. Noah can’t get enough.

Anthony can’t stay in Oregon for long, but as soon as he leaves, he’s counting down the days until he can fly back for more. And between his increasingly frequent visits, there’s always phone sex, sexting, webcams . . . anything they can get.

But Noah’s got a carefully crafted façade, and Anthony can’t help noticing the slowly forming cracks. The scent of alcohol in the middle of the day. The extra drinks at dinner. The hint of red in his eyes. Anthony knows what it means. He doesn’t want to believe it, but he’s seen this before, and there’s no denying it. If Noah doesn’t get his downward spiral under control, he’s going to lose both his career and the first man he’s ever really loved.

Reviews in the Series:
Afraid to Fly by L.A. Witt (Anchor Point #2)