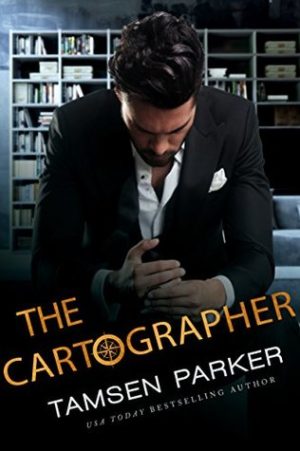 If you’ve been reading Tamsen Parker’s Compass series, you know Rey Walter—the kink puppeteer/matchmaker. I’ve always been curious about Rey, but never did I imagine the revelations in The Cartographer.

As always, I’m keeping this review spoiler-free. Which means it’s going to be short 😉

Allie Hart is an awesome guy. He hasn’t had an easy life but he’s responsible and committed. Not committed to someone else, though. Like, not romantically. I found myself wanting to slap Allie up-side the head and tell him to let Rey help. **pulls hair** We do get to watch Allie grow, too. I like seeing him overcome preconceived notions and become a fly on the wall when he’s with the people he cares about. I think I connected with Allie because he’s had a rough go of it, but seems to have come out the other side of his battles a better person.

Rey? Oh, I love the things we learn about Rey. It’s really nice to see his Dominant, match-making tush again. I think parts of The Cartographer were difficult to read for me because I like to have some semblance of control in my life, but the way Rey handles his own control—at times—is difficult for me. I read the words and I’m the person murmuring to my book, “Oh, honey…don’t do that.” Rey has been instrumental to this series. There’s a REASON he’s the Cartographer—he’s been charting a course for everyone else all these years and it’s finally—finally—time for him to travel the road toward his own happiness.

It’s been absolutely wonderful watching the development in Ms. Parker’s Compass series, and I’m sad to see the series end. But, this is good news for you—in the even you haven’t picked up this series, yet. IT IS COMPLETE. You may now commence the binge-reading.

My Rating: A+ Personal favorite

Reyes Walter is the man who engineers everyone’s happiness, and he’s never wanted anything else. He’s got a lucrative job as sovereign of the kink world and he delights in playing puppet master for everyone under his purview…which is everyone.

Allie Hart has got his hands full trying to find a job, and being there for his sister and her kids. Loyal to the bone, he’s not looking for anything to get in the way of his obligations.

When a chance encounter throws Allie into the wide swath of Rey’s concern, Rey’s resolved to play the hero as usual, and Allie’s determined to tell him where to stick it. The last thing Allie needs is some rich know-it-all treating him like a damsel in distress.

The attraction between them leads to more than a back alley tryst, but not anywhere close to for-keeps. Any lovers Rey’s had have been polished up and paired off with someone more suitable. After all, there’s always someone in need and Rey vowed a long time ago not to let anything or anyone come between him and his responsibilities. But Allie Hart may be the one gift he’s tempted to keep for himself.