The Wrong Kind of Compatible 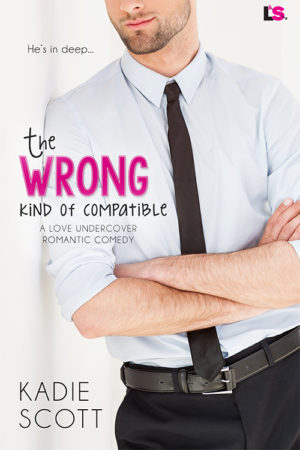 “Don’t you ever—” She cut herself off and glanced around the office. No one was paying them any attention, but she still gave a frantic look around before dragging him across the floor and around the corner where she opened a door marked as the server room, hauling him inside by the arm, and closing the door behind them.

Racks and racks of Data Minds’ proprietary servers hummed as they did the extraordinary work for the company. The room wasn’t as big as it could’ve been as Data Minds did a good deal of their work in the cloud, but these machines were where most of his and Cassie’s work was housed.

She visibly shivered as the colder temperature in the room hit them both. He couldn’t miss how her nipples peaked against her shirt in response to the chill. His mental image of lifting her shirt to suck those hard peaks into his mouth disappeared as she rounded on him.

“Don’t you ever undermine my analysis in front of anyone again. We agreed—”

He stepped closer, refusing to back down. “No. You dictated and assumed I agreed.”

She plonked her hands on her hips, angling her face to look up at him. “But you apologized.”

“For stepping on your toes. Not for being wrong.”

Her lips flattened. “Why didn’t you argue more if you felt so strongly about it?”

“I believe your words were, ‘Knock it off, Kerrigan. My recommendations are what we’re going with.’”

“And then you threw it in my face in front of our boss?”

Damn she was amazing when she got all worked up. The deep v of her shirt showed her breasts rising and falling with each agitated breath.

Suddenly the space felt way too intimate, closing in on him. The hum of the machines all around them provided a strange sense of being worlds away from the office that lurked just on the other side of the door. Her jasmine scent curled around him, and the distance between them needed to be increased. Immediately.

He turned away, intending to leave before he did something ill advised.

“I’m not finished,” she snapped.

Her words had him swinging back around. “What?”

She stalked toward him, stealing his breath with every step closer. When they were toe to toe, she glared at him, opening and closing her mouth a couple of times like she wanted to tell him off, but couldn’t find the right words.

“This can’t go on,” she finally muttered.

Then, in a move that stunned the hell out of him, Cassie stepped into him, tugged his head down, and proceeded to press those lush, fantasy-inducing lips against his. 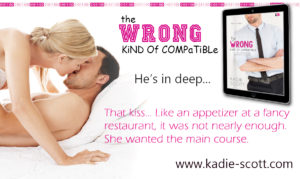 Data analyst Cassie Howard may be brilliant (and, okay, a little awkward), but she’s worked hard to get where she is. She definitely doesn’t need some sexy new analyst coming in and taking credit for her work. Or the inappropriate thoughts that keep popping out of her mouth she’d rather he not hear.

For undercover FBI agent Drew Kerrigan, computers have always made more sense than people, but he’d better develop some slick social skills in a hurry if he’s going to win over the too-tantalizing-for-his-sanity Cassie. Hacking their systems was easy. Now he’s just got to hack the one person in the company most likely to see through his ruse…

Award-winning contemporary romance author, Kadie Scott, grew up consuming books and exploring the world through her writing. She attempted to find a practical career related to her favorite pastime by earning a degree in English Rhetoric (Technical Writing). However, she swiftly discovered that writing without imagination is not nearly as fun as writing with it.

No matter the genre, she loves to write witty, feisty heroines, sexy heroes who deserve them, and a cast of lovable characters to surround them (and maybe get their own stories). She currently resides in Austin, Texas, with her own personal hero, her husband, and their two children, who are growing up way too fast.