Kari Lemor grew up as one of those kids who read all night under the covers.  Once she had her first glimpse of a romance novel at age 12, it was all over. Romance was in her blood. It would be many years before the stories that ran rampant in her head finally drove her to put words to paper, though. Now that her kids are all grown and have moved out, she uses her spare time to create stories of love and happily ever after romances. She lives with her husband in a small town in New England dreaming of warmer weather.  But only if it’s near the ocean.

For more information on her or her work check out her website: https://www.karilemor.com/

My husband and I moved to New Hampshire when we got married, thirty years ago this summer.

My very first published short story was for a NH anthology called Love Free or Die.  The story was called Canobie Kisses and took place at Canobie Lake Park. I love New Hampshire and think it’s a great place to inspire writers. Especially as it has all the seasons, and so many different landscapes; mountains, forests, ocean, lakes, rivers as well as urban, suburban and rural settings.

I have another series I’ve been working on, a small-town contemporary, where the family hub is a small, fictional town in New Hampshire called Squamscott Falls. Some of the stories take place on Cape Cod and the coast of Maine. The family’s name is Storm and so the series is called The Storms of New England. I love being so familiar with the area that my research isn’t extensive for this one.

I’d have to say spring. After shoveling snow all winter and the extreme cold temperatures we often get, the warmth of the season and the new growth in trees and plants is so refreshing.

An innocent in the crossfire . . .

FBI agent Jack Holland broke every rule in the book falling for the girlfriend of Angelo Cabrini, son of a New Jersey mob boss. But even if Callie Lansing’s relationship to Angelo was actually a cover and her heart was free, her relationship with Jack put both of their lives at risk. Nothing, though, could make Jack regret the liaison that led to the birth of their son, Jonathan.

After Angelo discovered Callie’s pregnancy, he went after Jack and wound up dead. Now Jack is on the run with a target on his back. The only thing keeping Callie and Jonathan safe is the mob boss’s belief that the baby is his grandchild. But if Victor Cabrini discovers the truth before Jack can put him behind bars, it could mean death for his sweet covert family. . . . 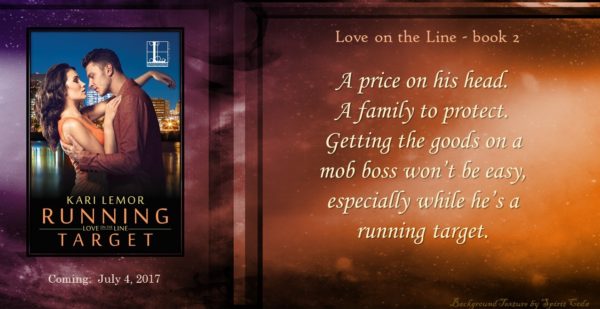 Stepping closer, he looked down on the clear container, the blue tag proclaiming this child to be a boy. Squinting in the dim light, he read the words. Mother’s name: Callina Lansing. Baby: Jonathan.

Jonathan. She’d named the baby after him. A lump clogged his throat. A son. Damn. He had a son and wouldn’t be able to get to know him, see him grow, share in his life. This f**king world was too cruel at times.

He shouldn’t take the chance but he needed to hold him. It was vital that he touch the life he and Callie had created. He wanted—no needed—to let his child know how much he loved him. The powerful emotion emanated from his heart even as he gazed down at the tiny figure. How could love grow this fast? His first glimpse was only a second ago. Now the feeling consumed him.

Reaching down, he stroked the side of his son’s face. The baby turned his head, his bow-shaped lips opening slightly. Jack’s heart beat faster. The protective instincts that had always come into play when he was around Callie, throbbed to life and expanded as he gazed at the sweet face of his son. Heat like an electric storm surged through his blood. How could he protect this child in his current situation? He’d bring more danger upon him if he hung around. Eight months of running, trying to escape the long arm of Victor Cabrini, had shown him what hell was. Now he glimpsed a small piece of heaven.

He slid his hands under the infant, lifting him from the bed to hold him close. Jonathan barely weighed anything. His heart constricted yet again. The innocent baby scent wafted into his nostrils and he blinked back the moisture filling his eyes. The reaction was primitive and territorial. This was his son.