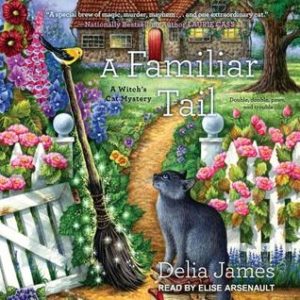 I am delighted that I picked up this audiobook, A Familiar Tail.  On a whim, I thought I would enjoy a story that blends mystery with magic.  Overall I really enjoyed both the story and the narration and can’t wait to listen to the next Witch’s Cat Mystery.

Though the story was a tad sluggish in starting because Anna was slow in getting into the magical pool, I enjoyed learning along with Anna about Portsmouth and especially the local witches’ coven.  What first began with Anna going to visit a friend for a little bit, turns into a huge life changing event.  Anna was a mostly carefree spirit, able live her gypsy-esque life as an artist while hiding her vibe ability.  Until this fateful visit, when she discovers her family’s roots, a persistent cat, and a murder mystery only it seems she can solve.  It seems Anna is descended from a magical family, and this vibe (her ability to perceive events that occurred or will occur in a particular space) is a gift of heritage.

I really enjoyed the detective bumbling of Anna as she tried to figure out who killed the local witch.  Though it was somewhat easy to figure out the “who,” the motive was elusive until the end.  I did really enjoy how Anna thoughtfully progressed through her investigation.  The plot was gripping, and I found it difficult to stop listening.  I also enjoyed that this was an audiobook I could listen to while in the car taking kids to school.  It’s akin to watching my beloved Hallmark Murder and Mysteries, nothing graphic or too mature for little ones to see or hear.  In fact, my son enjoyed asking questions about Alastair the cat.

The coven members and Anna’s friend, Martine, are all wonderful supporting characters.  Each seems unique and added their own energy and support to Anna’s investigation and new found roots.  But Alastair, the cat, was my favorite supporting character.  Though he cannot talk, I really enjoyed how he communicated with everyone, especially Anna.  Ms. Arsenault did a fabulous job in portraying Alastair’s personality and communicative skills.

Speaking of the narration, I did like Ms. Arsenault’s performance. Though some voices blended a bit, making it a bit tough to occasionally distinguish characters when a large number of them were gathered, I was still able to follow along and enjoy the story.  Her natural voice was a perfect voice for how I imagined Anna.  I look forward to listening to her as Anna again.

Overall I enjoyed this new series, Witch’s Cat Mystery.  Anna and Alastair make a funny and interesting amateur sleuthing team.  Though it was at times difficult to distinguish individual character voices, I did like Ms. Arsenault’s narration and look forward to listening to her voice this world in the next novel.  If you enjoy some light-hearted mystery sleuthing with a dash of magic, you might want to pick up A Familiar Tail.

Story: A, Loved It
Narration: B+, Liked It A Lot
Overall: A-, Enjoyed A Lot

Unlucky-in-love artist Annabelle Britton decides that a visit to the seaside town of Portsmouth, New Hampshire, is the perfect way to get over her problems. But when she stumbles upon a smoky gray cat named Alastair, and follows him into a charming cottage, Annabelle finds herself in a whole spellbook full of trouble. Suddenly saddled with a witch’s wand and a furry familiar, Annabelle soon meets a friendly group of women who use their spells, charms, and potions to keep the people of Portsmouth safe. But despite their gifts, the witches can’t prevent every wicked deed in town . . . Soon, the mystery surrounding Alistair’s former owner, who died under unusual circumstances, grows when another local turns up dead. Armed with magic, friends, and the charmed cat who adopted her more than the other way around, Annabelle sets out to paw through the evidence and uncover a killer.