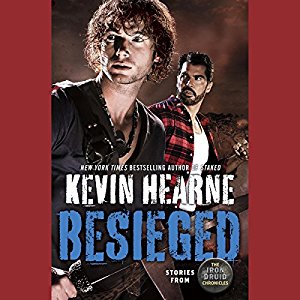 Besieged is a collection of tales all set in the Iron Druid world. All but the last few are not directly related to the current storyline. Many are fun recountings of events in the long lives of these characters.

*Note: I could not find a listing of the story titles within the book, so I did my best trying to catch the names when listening to the audiobook.

This is a story Atticus shares with Granuaile and Oberon; told between Tricked and Two Ravens and One Crow, when Granuaile is still an apprentice.

Atticus narrates a story from back in the third century when the Celtic god Ogma wants Atticus to steal some books from the library in Alexandra. We find out that the Egyptian and Celtic gods do not get along. It was an interesting side-story about a much younger Atticus and how he first meets the iron elementals. The story makes direct reference to another short story, “Grimoire of Lamb,” which I haven’t read so I may have missed a joke or two.

“Goddess at the Crossroads”

Another story shared by Atticus during the same time period as the previous book, that is actually a recounting of a story from long ago.

This one takes place during time of Shakespeare, just after the death of Queen Elizabeth. Atticus links up with Shakespeare for an adventure during the time he was writing MacBeth. It doesn’t have any relevance on the current series, but was fun.

“The Demon Barker of Wheat Street”

This one takes place two weeks after “Two Ravens and One Crow,” and was originally published in the Carney Punk anthology.

The tale is a bit of a non sequitur about a trip to a fair where demons and ghouls are feasting on humans. The story takes place in Granuaile’s hometown as she attempts to visit her mom. The story felt a wee bit gorier and darker than the usual stories, but was interesting.

This one is another recounting of a story during Atticus’s history. He shares it shortly after the time of the previous “Demon” story.

Atticus is called to California during the gold rush because Gaia sensed a dangerous demon is loose and causing problems. I liked this tale because it shared more of what it’s like to be a Druid protecting Gaia and Atticus’s life on the run from Angus Og.

“The Boogie Man of Boora Bog”

The book shifts gear and moves to a tale narrated by Owen. This story takes place after Staked but before Oberon’s meaty mystery story.

Owen tells Greta about how he came to be Atticus’s arch Druid. Once again we have a story that is actually a retelling of past events. The story is about when Owen was younger and was sent to save Gaia from the clearcutting behaviors of some villages. He meets another Druid who is kidnapping and eating children. In the aftermath he meets a young Atticus. He tells Greta that the events at the bog changed him and therefore changed how he taught Atticus, which may be why he is the way he is. I like the insight it provides, and it also sets up Greta and Atticus being able to work together again (coming up).

This short is narrated by Perun and takes place after The Purloined Poodle.

The story follows Flidais and Perun as they explore new sexual fantasies at a dungeon in Scotland. However unbeknownst to Perun, Flidais uses him to trap a nymph. I really enjoyed this one because it directly related to parts of the overall storyline and is current in the series order. I loved learning more about Perun and his complex personality.

The next three stories are all current and take place between The Purloined Poodle and the upcoming Scourged.

Narrated by Granuaile, the tale picks up during her time in Poland. While working at her job in the local pub, Granuaile is visited by a vampire on the eve before all vampires are to leave Poland. We get to see Granuaile in action as a full Druid and taking care of business without the support of Atticus and Owen. I really like the story because it moves forward the overall series as it approaches the final story.

Next, it’s Owen’s turn to share what he goes through as we approach the final book. He gets a call for help from Tasmania (same as Atticus, which was mentioned in “Blood Pudding”). Owen and Greta prepare his six apprentices to help heal cancer-stricken Tasmanian Devils. The story is great for we finally get to see Greta and Atticus working together again. It also foreshadows the upheaval awaiting as Loki starts Ragnarok.

“The End of Idols”

And finally, we get Atticus’s version of events as we lead up to the end of the series. He and Oberon are still in Tasmania, healing the Devils, when the Morrígan comes to Atticus in a dream. Atticus also shares with Oberon what happened to his first and only other long-term animal companion.

The tale is not really a complete story, but rather it sets the stage for the final showdown between Atticus and Loki, and what could be the end of the world. It’s a bit of an emotional tale because Atticus seems to be saying goodbye to Oberon as he prepares for what could be his own death.

I really enjoyed listening to Besieged. Luke Daniels has come to be one of the all-time best narrators I have ever heard. His range of voices is truly unmatched. I loved listening to him give life to so many different characters. Overall, the stories are mostly interesting and fun to listen to, however the last three stories were the best because they set the stage for the final book, Scourged.

Of note: I change my listening speed from my usual 1.5x down to 1.25x. I don’t recall exactly when, but it was because the vehicle I drove in for much of the book seemed to play the stories a bit faster than when I listen via headphones.

• In ancient Egypt, Atticus agrees to raid a secret chamber underneath the library of Alexandria, dodging deadly traps, only to learn that on-site security includes two members of the Egyptian pantheon.
• At a Kansas carnival, fun and games turns to murder and mayhem, thanks to soul-snatching demons and flesh-craving ghouls luring visitors into an all-too-real house of horrors.
• Verily, in olde England, striking up a friendship with William Shakespeare lands both Atticus and the Bard in boiling hot water with a trio of infamous witches.
• During the Gold Rush, the avatar of greed himself turns the streets of San Francisco red with blood and upsets the elemental Sequoia. Atticus may have to fight fire with fire if he’s going to restore balance.

More, you say? Indeed there is—including bogeymen, vampire hordes, wrathful wraiths, and even a journey to the realm of the dead. Prepare to be besieged with nine tantalizing tales—not to be missed, never to be forgotten.