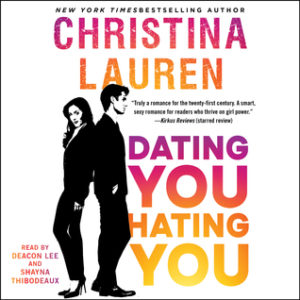 What to say about Dating You / Hating You? I really, really wanted to love this book, but I didn’t. Christina Lauren authors some of my favorite titles, but this unfortunately isn’t one of them. And rather than continue to listen to it, I decided to call it quits at the 57% mark (through Chapter 15). Let me tell you why…

Carter and Evie are wonderful characters who have a beautiful initial chemistry. They are adorable together, both a bit shy and unaware of how sexy they are. And while their jobs as talent agents in LA have kept each from relationships in the past, the instant connection the pair feels compels them to make a go of things. They have one great date and a hot make out session until everything falls apart.

When Evie’s firm buys out Carter’s firm, the pair is forced to compete to keep a job in the LA offices. While it isn’t certain either would be let go or asked to relocate to New York, their asshole boss, Brad, along with their individual competitive natures creates bitterness and conflict, setting up the need to vie for the job. And things fall apart quickly from this point. Carter and Evie are both underhanded, doing things to make themselves look better while potentially sabotaging the other. It’s not horrible at first, but a poke here and a poke there creates such animosity that I cannot stand to listen to it. I finally gave up after a rather silly, yet cruel exchange of pranks involving coffee and hand lotion.

It was a tough decision for me to stop listening. The narration is actually part of the reason I went as long as I did. Both Ms. Thibodeaux and Mr. Lee are fantastic! Both have very clear, sharp voices that are simultaneously relaxing. Ms. Thibodeaux gives weight and maturity to Evie, while Mr. Lee brings manages to get adorkable for Carter. Both narrators have excellent narrative voices and a range to fit a variety of both male and female rolls.

In the end, Dating You / Hating You had too much Hating You and not enough Dating You. I’m guessing at some point, the couple works out their issues and hopefully ends up together, but the conflicts were so difficult for me to listen to, I just couldn’t keep going. I may pick it up again in the future, but for now, it’s a DNF.

Despite the odds against them from an embarrassing meet-awkward at a mutual friend’s Halloween party, Carter and Evie immediately hit it off. Even the realization that they’re both high-powered agents at competing firms in Hollywood isn’t enough to squash the fire.

But when their two agencies merge—causing the pair to vie for the same position—all bets are off. What could have been a beautiful, blossoming romance turns into an all-out war of sabotage. Carter and Evie are both thirtysomething professionals—so why can’t they act like it?

Can Carter stop trying to please everyone and see how their mutual boss is really playing the game? Can Evie put aside her competitive nature long enough to figure out what she really wants in life? Can their actor clients just be something close to human? Whether these two Hollywood love/hatebirds get the storybook Hollywood ending or just a dramedy of epic proportions, you will get to enjoy Christina Lauren’s heartfelt, raucous, and hilarious romance style at its finest.