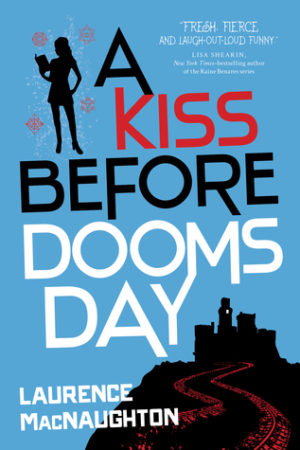 A Kiss Before Doomsday is the same fun, campy energy that we found in the first book, It Happened One Doomsday.  The world that MacNaughton built in the first book, takes off now that we know the rules.  He takes his characters and runs with them, building on the story of the first book (definitely read these in order) and creating something bigger.

I love that main character Dru continues to be genuine.  She really does want to help people, especially those she loves, and although she’s a crystal sorceress and hangs out with some very unusual people, she’s somehow entirely relatable. For as frail as she sometimes seems, especially in comparison to other characters, MacNaughton did a very good job of making her both vulnerable and strong—she both saves and gets rescued.  She and love interest Greyson balance each other well. I appreciated that making him strong did not require Dru to be weak nor did making Dru shine require that Greyson be less masculine.

Although Dru and Greyson are clearly in love, the only romantic action in this read is a kiss at the end.  MacNaughton inserts a surprising, if unnecessary, scene that will at least make female readers chuckle. It was entertaining in the same way watching Carrie Bradshaw pack up her closet was on Sex in the City.  https://www.youtube.com/watch?v=eo3vHKimpi4

There is a sarcasm that I enjoyed, comedic in the same way Pirates of the Caribbean walks the line between conceivable and hokey, staying this side of believable.  Gore Verbinski should direct the movie.  It’s a world where lines make sense like, “She already ate half the box [of donuts].  Then she went out for smoothies. Said she’d burned too many calories in the cannonball fight.”

Chapters are short and keep the action moving which makes for a relatively fast read despite the plot depth which is still present. I have to knock a few points down for one or two parts that may come off as predictable to regular sci/fi readers.  It makes the mental movie easy to visualize. There are no real secondary plots which keeps the focus tight.  Good read and I’m looking forward to the next one.

When an undead motorcycle gang attacks Denver’s sorcerers, only one person can decipher the cryptic clues left behind—Dru Jasper, proprietor of the Crystal Connection and newly minted sorceress.

Though Dru has learned how to harness the powers of her crystals, she’s in over her head. A necromancer is using forbidden sorcery to fulfill the prophecy of the apocalypse and bring about the end of the world.

Dru’s only chance to stop him requires tracking down her would-be boyfriend, hot rod mechanic and half-demon Greyson. Everyone thinks he’s dead, but Dru believes he’s still alive, and finding him is the key to unraveling this evil.

To learn the truth behind the necromancer’s attacks, Dru must team up with her friends, and maybe even an enemy or two. Only Rane’s brawn, Opal’s wisdom, and Salem’s spells can help her infiltrate the necromancer’s hidden lair, stop the prophecy, and save the world. But they need to do it fast before legions of the undead rise to consume the souls of everyone on earth. . . .

Reviews in the Series:
It Happened One Doomsday by Laurence MacNaughton (Dru Jasper #1)