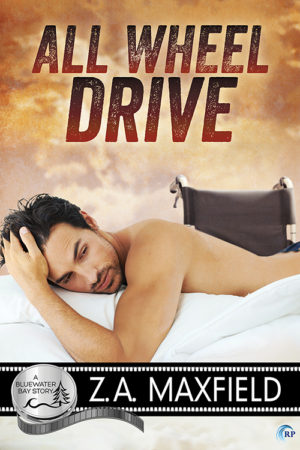 All Wheel Drive
Author: Z.A. Maxfield
Reviewer: B.
Rating: A-

Diego Luz had a plan of his own before an accident caused a spinal injury that cost him the use of his legs. Losing his vibrant, wild, beautiful mother shortly afterward was too much for him to take. Relocating to Bluewater Bay was the perfect way for him to start over—and hide from his mother’s legacy. At least, until a haggard, broken survivor shows up on his doorstep looking for some shelter of his own.

Born a genius who always knew the direction his life would likely take, Healey Holly wasn’t prepared for the day that script would be utterly destroyed. Now, hurt and lost, he’s struggling to get back to a place where things make sense, even though his “home” belongs to someone else. But, some families are just as good without a permanent zip code, and even a heart that’s been shattered can love again.

As should be expected from this series by now, All Wheel Drive left me with a lot to think about. Having first been introduced to Healey in Hell on Wheels, I couldn’t help but be extremely curious about Nash Holly’s intriguing twin brother. Officially meeting Healey as he is in the beginning of this story was a shock, and I felt off balance (in a good way) for the duration. There was nothing easy about Healey’s experience, but I think the story wouldn’t have meant as much any other way.

Diego Luz is just as complex, if not more so, but in vastly different ways. Between his heritage and upbringing, his pride and independence, and the obligations he struggles with, he’s a complicated character, and I liked him a great deal for it. He’s unapologetically cynical for much of the story, making his grudging willingness to open his heart and life to another even more remarkable.

As has been the case with many of the Bluewater Bay stories, All Wheel Drive tackles some exceptionally difficult topics that most series wouldn’t attempt. As a paraplegic, Diego’s sexuality could have been approached in ways that might have been more “delicate,” but wouldn’t have made nearly the impact as it did here. Healey is absolutely the perfect match for Diego in that respect, but the candid nature of the discussions and mechanics involved felt both necessary and right.

Despite the importance of the message of this story, All Wheel Drive still manages plenty of romance, too. From blushes and uncertain smiles to undeniable warmth and laughter, there’s enough here to make the hope that burns brighter as the narrative progresses seem almost real. There was genuine sweetness sprinkled amid the fear and uncertainty, and the combination made this one of my favorites in the series yet.

The Bluewater Bay series has consistently endeavored to include as many different kinds of relationships as possible, and All Wheel Drive is no exception. Diego and Healey are prickly, wonderful characters, and they each got under my skin in very dissimilar ways. A great deal of care seems to have been taken to respect every facet presented, which is something else that could have easily been overlooked, but wasn’t. The return of some of the other characters I’d fallen in love with just made it even better. Even though All Wheel Drive could be read as a standalone, I highly recommend the series be read in its entirety, Hell on Wheels, most especially.

Healey Holly is battered, depressed, and looking to go to ground in his childhood home. He wants to rent the garage apartment, but it’s Diego Luz’s place now, and the last thing Diego wants is to share it.

Diego is recovering too—from the accident that put him in a wheelchair and the death of his mother shortly after. The garage apartment is where he’s keeping his mother’s things, and as long as they’re up those stairs and he’s down on the ground, there’s no way he can deal with his loss.  And that’s just how he likes it.

Healey believes in science. Diego believes in luck. It will take a blend of both, and some prayer thrown in besides, for these two to learn that it’s the journey and the destination that matters.

Check it out at Riptide Publishing! http://www.riptidepublishing.com/titles/universe/bluewater-bay

Z. A. Maxfield started writing in 2007 on a dare from her children and never looked back.  Pathologically disorganized and perennially optimistic, she writes as much as she can, reads as much as she dares, and enjoys her time with family and friends.  If anyone asks her how a wife and mother of four manages to find time for a writing career, she’ll answer, “It’s amazing what you can accomplish if you give up housework.”

To celebrate the release of All Wheel Drive, one lucky winner will receive an ecopy of Hell on Wheels and a $25 Riptide credit! Leave a comment with your contact info to enter the contest. Entries close at midnight, Eastern time, on July 15, 2017. Contest is NOT restricted to U.S. entries. Thanks for following the tour, and don’t forget to leave your contact info!