Welcome to the Riptide Publishing/L. A. Witt blog tour for Get a Grip, the latest Bluewater Bay story!

Every comment on this blog tour enters you in a drawing for a choice of two eBooks off my backlist (excluding Get a Grip) and a $10 Riptide Publishing store credit. Entries close at midnight, Eastern time, on July 29th, and winners will be announced on July 30th.  Contest is NOT restricted to U.S. entries. More info at the end of this post 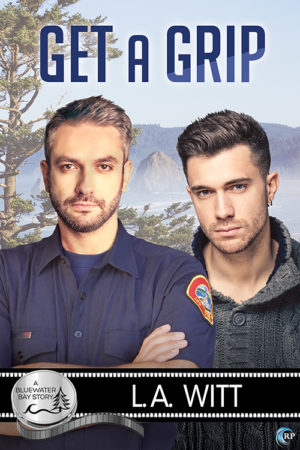 Get A Grip
Author: L.A. Witt
Reviewer: B.
Rating: insert your letter (only) grade rating

Like anyone else would surely be, Shane Andrews was completely unprepared to be a teenaged dad, especially when he ended up raising his daughter alone. Now, two more kids and two divorces later, he’s ready to reach beyond his role as the responsible father and experience some of the fun and sexual abandon he missed out on all those years ago. When an unexpected disaster on the Wolf’s Landing set brings him together with a sexy firefighter, Shane gets more than he bargained for.

Having been burned in the past in more ways than one, Aaron Tucker gets his kicks via random hookups, rather than jumping into fires—or relationships. Casual suits him just fine, thanks. Until the lonely father of three he wanted in his bed suddenly claims a piece of his heart without his noticing. But, Aaron’s new longing for a commitment with Shane can’t go anywhere if the latter won’t stop running.

Get a Grip, the latest in the Bluewater Bay series, has a lot going for it. I thought Shane was pretty relatable as a single father of three who had to grow up too fast, and is trying to work through the guilt and accept his own desire to play for a while, now that his kids are getting older. Aaron was just as intriguing, if not more so, given his openness, enthusiasm, and increasing affection for Shane. And while it wasn’t without an awkward moment or two, there were plenty of very nicely written scenes in the story that kept me involved and eager to stick with the narrative to the end.

Even though the protests from both Shane and Aaron became a little too rote towards the end of the story, I still found it extremely rewarding when they both realized they’d been in an accidentally successful monogamous relationship the entire time. The “well, what do you know?” effect was sweeter than I thought it would be, and I liked it despite the skepticism I’d been prepared to feel. Shane’s epiphany was especially pleasant, given that I sort of wanted to smack him at that point:

“I didn’t miss doing everything I hadn’t been able to do in my twenties. I missed the man who’d been worth waiting my whole f***ing life to find.”

Once again, the Bluewater Bay series presents readers with an often fun, yet thoughtful look at complicated situation that deserves more attention. Shane has always made his children his top priority, but that doesn’t mean he’s not entitled to carving out a life for himself as well. Aaron was still my favorite of the two, however, and there was a sweetness to his changing emotions that I really appreciated. I also absolutely loved seeing Brennan, Tariq, and Zafir from All the Wrong Places, and catching up with them was definitely a highlight of the story for me. On the whole, I thought Get a Grip was a welcome addition to the series, and I’m keeping my fingers crossed for a cameo with Aaron and Shane (and the kids and pets!) in the future.

A year after his divorce, Shane Andrews isn’t interested in dating—not that he has time, between three kids and a demanding job as a grip. When a windstorm knocks a tree onto one of the Wolf’s Landing soundstages, Shane’s there to help with the mess . . . and so is firefighter Aaron Tucker.

A former smoke jumper, Aaron’s an adrenaline junkie and way too restless and reckless to be relationship material. As far as he’s concerned, monogamy is for penguins, and he’d rather be alone than tied down. Signing up to be a stepparent? No, thank you.

But after a scorching-hot night together, they’re hooked. Aaron is a taste of the excitement Shane’s been lacking, and Shane’s pushing buttons Aaron didn’t know he had. The more they’re together, the less Aaron craves wild nights with other men . . . but the more Shane wants to play the field like he never got to in his twenties.

This could be the love neither man knew he needed, but only if Shane gets his feet back on the ground before Aaron walks away.

L.A.’s backlist is available on her website, and updates (as well as random thoughts and the odd snarky comment) can be found on her blog or on Twitter (@GallagherWitt).

To celebrate the release of Get a Grip, one lucky winner will receive their choice of two ebooks off L.A.’s backlist and a $10 Riptide credit! Leave a comment with your contact info to enter the contest. Entries close at midnight, Eastern time, on July 29, 2017. Contest is NOT restricted to U.S. entries. Thanks for following the tour, and don’t forget to leave your contact info!

One response to “Review + Blog Tour: Get a Grip by L.A. Witt”