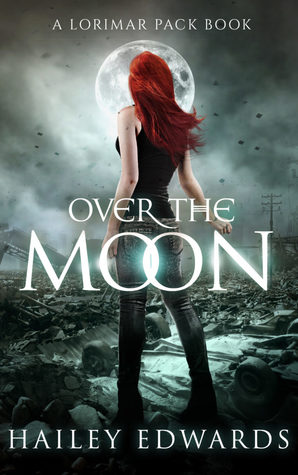 Over the Moon
Author: Hailey Edwards
Reviewer: VampBard
Rating: A+

I think Over the Moon is an excellent end to the Lorimar Pack books in the Black Dog universe. Don’t get me wrong—I’m definitely up for more books in the universe—as matter of fact, I think Ms. Edwards sets us up well for at least a novella for Theo—but Dell’s story arc feels complete in a satisfying way.

That makes sense, right? You guys know what I’m talking about.

I’ve been very vocal about adoring the Black Dog universe since it started. The world-building is killer, and any time I have questions, I can guarantee they’ll be answered by the end of the plot arc for the main character. And the end of Dell’s books is no exception. As matter of fact, I think a lot of things are tied up in a neat little bow at the conclusion of Over the Moon.

What killed me: Making hard choices in the best interest of the pack—and Earth.

“You’re my heart, Dell.” His fingertips skated down my arm. “You think I can’t tell when it’s aching?”

What finally made sense: Dell’s revelation about Abram.

What I loved the most: How all the beloved characters from the series rallied during a time when they could’ve all just hid away to keep their own safe.

But, most of all, I loved the relationship between Dell and Issac—and, the interplay with Theo (who I still have questions about).

Readers will get the most out of Over the Moon if they read all the Black Dog books first. Thierry and Shaw as well as Cam and Cord have a HUGE role in this book. We even get to see a little kitsune and her mate 😉 But, the appearance of other favorite fey & shifters doesn’t overshadow the whole aspect of Dell’s growth.

When we first met Dell, she was a shell of herself. She was hiding from who she really was in an effort to protect herself. After she leaves Bessimer’s pack, she falls naturally into the leadership role of Beta for Lorimar. However, there’s still things—even though she’s mated to Issac—that need resolution for her. She needs to feel like she can stand on her own and that she has value. I think Ms. Edwards did a phenomenal job with Dell’s character arc, because that is evident by the end of this title.

While I haven’t heard anything about more Black Dog titles, Ms. Edwards has her new urban fantasy series, The Foundling, available October 17, 2017, and the first title in her new Beginner’s Guide to Necromancy series will be available later this summer. I’m super excited for both!

Dell has persuaded the Bloodless army to fight alongside her pack in Butler, but she still has to get there. Halfway home, the rift detonates, blasting out a magic surge that sweeps across the globe, frying electronics and spells alike. Leaving her with no way to get home except on her own two–or four–feet.

Dangerous times demand equally lethal alliances, and she has to make a risky deal if she wants to reach the front lines before it’s too late. The bargain grants an ancient fae power over her, a hold she vowed no man would ever have on her again, but freedom requires sacrifice.

As the threshold between Earth and Faerie erodes, humans and supernaturals alike are in danger of being erased as the fae seek to claim this world as their own. This is the moment when new legends arise and old gods fall, when fates unspool and futures unravel, when battles are won and lives are lost.