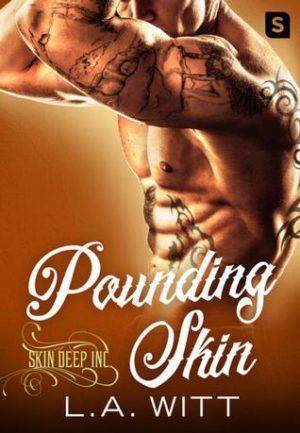 Picking up shortly after Back Piece, the first story in the Skin Deep, Inc. series, Pounding Skin introduces readers to jet pilot Jon Russell and inker Matt Huffman, whom we briefly met before. Although the pairing of a member of the military and a civilian employee of the tattoo shop is the same, the characters are so different that there’s very little repetition. While familiar within those parameters, this sequel feels brand new in plenty of other ways, making the entire series better overall.

Even more than the first story in this series, Pounding Skin is a tale in which “opposites attract.” Jon throws his candor, which was downright abrasive on occasion, before him as if it were a shield he can hunker down behind, while still feeling blameless for anyone else’s hurt feelings. Matt, on the other hand, seems so genuine—even when he’s clueless—that I worried for him for the duration of the novel. Of the two, I couldn’t help the fondness I felt for Matt from the start, nor the protective irritation that was repeatedly inspired by Jon’s behavior. Nearly all of the emotional ballast is on Matt’s side, but it ended up working out well that way.

Although I enjoyed Pounding Skin as a whole a great deal, there were some instances that I found distracting (but not particularly troubling). The sudden reversal of Matt’s old, alcohol-induced amnesia about an important moment with his college roommate; certain phrasing that’s repeated nearly verbatim; the suggestion that women are more easily “charmed” than men when it comes to sex, etc., did pull me out of the narrative on occasion. These moments are few, however, and are nicely balanced out by the more positive aspects of the story.

Pounding Skin is a well-crafted second in the Skin Deep, Inc. series, and one I feel certain I’ll revisit soon. While I was never able to fully sympathize with Jon, I felt that Matt was a truly wonderful character. More than a romance, however, Pounding Skin examines the ways we are shaped by our experiences, sculpted by many other hands in addition to our own. I was also very glad to see more of Colin and Daniel from Back Piece, and every bit of the affection I have for them both was not only remembered, but magnified. The tattoo shop seemed like a real family this time around, and I loved what it so obviously means to all those who work there. If the first two stories are anything to go by, the third should be just as engaging, and I’m extremely eager to find out what these guys might do next.

Fighter pilot Jon Russell never sleeps with the same man twice. Known for his lack of shame when it comes to hooking up, Jon has no interest in commitment—even friends with benefits sounds like too much work.

Matt Huffman has slept with lots of women. He’s had loads of girlfriends. So why does the hot as hell pilot getting a tattoo as the result of a lost bet stop his breath? And how come he can’t stop thinking about him, even after he’s gone?

When Jon returns to Skin Deep the second time, he doesn’t want another tattoo. He wants to hook up with the gorgeous artist he spent hours agonizingly close to, and Matt wants to explore some curiosity about men. Fulfill the desire he can’t stop fantasizing over. And he wants to do it with Jon.

As their casual hook up becomes more than just skin deep, both Matt and Jon are faced with questions they don’t want to answer. Matt understands he’s bi—but are these feelings he has typical of hooking up with a man? Or is it only Jon that can make his heart pound? If Jon wanted nothing more than a fling, why does he find himself needing not just Matt’s body, but all of him? And can their relationship withstand the hardships that makes Jon avoid them in the first place?