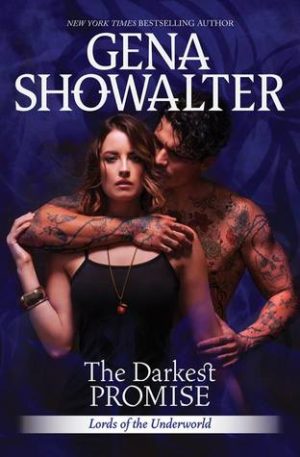 Cameo, the keeper of Misery, remembers forgetting someone. A dark man who made her… happy?! She thinks it could be Lazarus the Cruel and Unusual, but her demon has blocked it from her memories. She has found her way to Lazarus’s realm using the Paring Rod in hopes of finding out the truth.

Lazarus is stuck in a land of the dead, but he is not dead; sort of. His thoughts revolve around vengeance: to kill his father, Hera, and the harpy who banished him to this realm. He found his “one true mate” in Cameo, and he is obsessed with finding her after she left his side never to return. He is also slowly dying from crystallized veins, something that occurs once the male of his species finds their “true mate.” Now he’s torn between his need for vengeance and desire for Cameo, which is killing him.

Due to the fact that The Darkest Promise follows a couple story arcs that began a few books ago, I don’t recommend anyone new to the Lords of the Underworld series start here. It is probably the best of the most recent books, as it mostly stays focused on the romantic storyline and only one overarching plot line, keeping the book moving without creating a lot of unnecessary confusion. I am especially thankful that the book didn’t spend time on the Gilly/William issues.

Cameo and Lazarus are good together and “meant to be.” I enjoyed their back and forth, and the fact that both wanted to protect the other more than life itself was rewarding. Many times, I got the mushy, squishy heart feeling because of an action or words thought/spoken. Both Cameo and Lazarus have personal issues they must hurdle in order to get to their HEA. Calling this “Cameo’s book” would be unfair, as it is equal parts Lararus’s story.

Outside of the primary romance, the book addressed more in the on-going war between Hades and Lucifer. I honestly can’t recall how this story started, and I still wonder what happened in the “real world” with the rise of the Titans. I know the Lords took down the leadership, but aren’t there temples or something out there? I don’t know how the Sent Ones (from the spin off series) and all the conflicting mythologies tie in together, but I just go with the flow of the story.

Overall, I’m glad I read Cameo’s book, but honestly, the series is kind of going past me. I found it hard to get into The Darkest Promise primarily because I don’t really remember where there series is heading. (NOTE: there is a “timeline” at the end of the book; a listing of the key events of each book. I discovered about 50% through The Darkest Promise. It was cryptic but useful in recalling past events.) The mythology is branching out rapidly with a haphazard feel to the direction. The overall cohesiveness and connectedness of the series has been lost, leaving me apathetic towards the outcome. Diehard fans of the series will undoubtably enjoy Cameo and Lazarus’s tale, but it was just okay for me.

Possessed by the demon of Misery, Cameo isn’t allowed to experience joy. If she dares, her memory is wiped clean. With no other recourse, she sneaks into a land more fantastical than any fairy tale, determined to find the one man with the key to her redemption.

Lazarus the Cruel and Unusual rules his kingdom with a single unwavering focus: to build his army and annihilate his enemies. Nothing distracts him – until Cameo. He is relentless in his quest to make her smile and seduce her into his bed.

As dark forces conspire against them, threatening to destroy the fragile bond they’ve forged, the once-calm Lazarus grows crazed. Every heart-stopping kiss and wicked touch causes Cameo to teeter on the brink of happiness. But if she falls, she risks forgetting him forever.