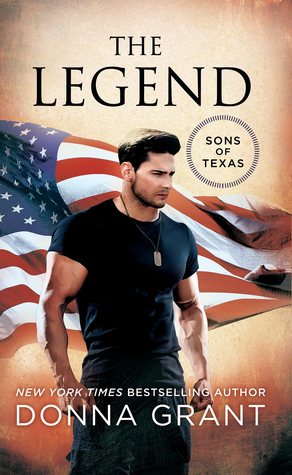 As always with military romance, there’s an element of suspense. The Legend is no exception—and I love the way Ms. Grant weaves pieces of the information we’ve already learned through the previous two books in the series as reminders, or for readers that are new to the Sons of Texas books.

This book was about the third Loughman brother, Wyatt. Now, until this point in the series, Wyatt has been pretty aloof, and I definitely had a driving desire to know more about him and his ‘tortured hero’ status. Because, we ALL want to know more about the tortured heroes. 🙂 As the leader of a Delta Force squad, he’s used to people A) listening to him/taking orders from him, and B) having the loyalty of his men. I think that’s one of the big things about Wyatt that I liked seeing. How he handled different things—not just the romance part of the storyline. He’s a thinker, and I felt like he was honest about parts of his life and held back on others—i.e., romance with Callie. Because, he screwed up once, right?

Callie Reed comes from a ‘mafia’ family. They have wanted Callie back in their clutches for over a decade—since she escaped them. What I love most about Callie’s character is the way she relates to Wyatt while still protecting herself. Callie’s gifts & talents make her an asset in the battle against the Saints—the baddies we met in the first book of the series who are waaaayyyyy more than originally thought.

As always, with RS, I’m not going to give a lot of details because it’s spoilery and I don’t roll that way. But…I definitely need MORE ORRIN!!! The patriarch of the Loughman family NEEDS at least a novella

Callie Reed doesn’t need a man to protect her. An expert sharpshooter and renegade hacker, this Texas-born spitfire’s got the skills and the courage to stand up to any danger―no matter how deadly. But when she becomes the target of a shadowy organization known as the Saints, Callie is forced to team up with the one man she can’t outshoot: the gorgeous, and infuriating, Lone Star legend named Wyatt Loughman…

A Delta Force Colonel with a rock-hard body and stone-cold heart, Wyatt has been teasing and tormenting Callie since they were playmates on his family’s ranch. Of course, he’s wildly attracted to the fiery, strong-willed Callie. But he’s always hidden his feelings behind a wall of Texas tough and military cool, even as he’s burning up with desire. Can Wyatt save Callie’s life―without putting her love in the line of fire?