Wildfire opens immediately after the conclusion of the previous book, White Hot. Rogan and Nevada return from their mini-vacation to tell her family about Victoria Tremaine trying to buy out their company. However, when Rogan and Nevada arrive, Rynda Charles, Rogan’s ex-fiancee (arranged marriage when he was three) and daughter of Olivia Charles (the baddie from book 2) is waiting for the pair. Her husband is missing, and no one will help her because of her mother’s disgrace. Nevada takes the case, starting the next round in the ongoing war with the unknown group of Primes looking to cause chaos in Houston. This book is not a standalone and should only be read following the first two books in the series.

While billed as a romance, Wildfire is much, much more, and I would argue that the romance is not the primary aspect of the book and series (which is why I label it urban fantasy). With that said, the relationship of Rogan and Nevada continues to evolve, intensify, and mature. I adore their journey. Individually, each is learning how to adjust their own behaviors to better fit as a couple, while simultaneously working to accept the other’s idiosyncrasies and persona. I LOVE how they take turns helping each other get past emotionally difficult places. This time around, Rogan lets Nevada rage and then tells her he loves her and together they will make it. Other times she’s doing the same for him. It goes far to create such three-dimensional, likable characters.

There are three major, overarching storylines which are furthered during the telling of Wildfire. First, we finally meet and learn much more about Nevada’s paternal grandmother, Victoria. The authors wow’d me with this character who appears to be both bad and good. I felt like I was on a roller coaster as Nevada experiences a range of emotions, learning more about Victoria.

Closely related this is Nevada and the Baylor family’s decision to become a House. The motivation behind the move is protection from Victoria, and as we learn more about her, I can see why this course of action, no matter the risks, is probably for the best. I was so worried during the entire process that something would go wrong – whether intentionally or coincidentally, and without giving spoilers, I will say, the entire journey was well-written and thrilling.

Additionally, Nevada and Rogan learn more about the group of Primes looking to create a new world order in Houston and beyond. This story is closely tied to all other aspects in the book. We start to see much more of the bigger picture; however, the ending is left WIDE open with many details of the overarching plot line still unknown. This did not read like the final book in a series, and I pray it is not the end. While it is an amazing story, and there is definite conclusion to much of the story, there is still a lot left to be told.

Of course, I went straight to Twitter and felt a measure of relief when the author shared: 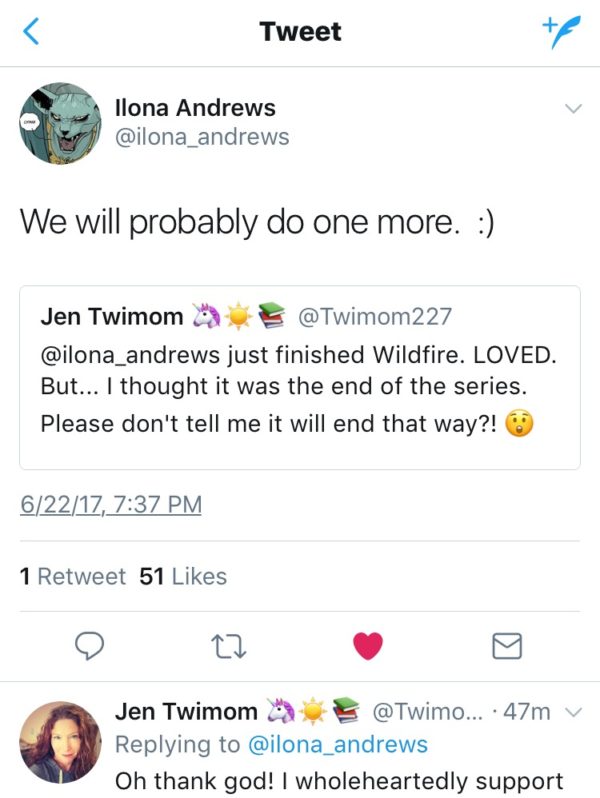 In the end, Wildfire is a wonderful story in an amazing series. The authors have taken incredible care to create a whole set of characters beyond just the hero and heroine. I have become attached to each member of Baylor clan, and I adore that every character has purpose, each with their own story. While the action is intense, the emotional depth takes this story and series from great to amazing. I highly recommend reading the entire three-book Hidden Legacy series from the beginning.

Just when Nevada Baylor has finally come to accept the depths of her magical powers, she also realizes she’s fallen in love. Connor “Mad” Rogan is in many ways her equal when it comes to magic, but she’s completely out of her elements when it comes to her feelings for him. To make matters more complicated, an old flame comes back into Rogan’s life…

Rogan knows there’s nothing between him and his ex-fiance, Rynda Sherwood. But as Nevada begins to learn more about her past, her power, and her potential future, he knows she will be faced with choices she never dreamed of and the promise of a life spent without him.

As Nevada and Rogan race to discover the whereabouts of Rynda’s kidnapped husband and are forced to confront Nevada’s grandmother, who may or may not have evil motives, these two people must decide if they can trust in each other or allow everything to go up in smoke.