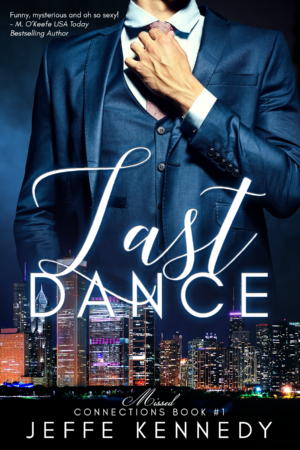 Marcia swiped at the tablet. “No fighting or I send you two to your rooms. Let’s compose Charley’s. Woman for Man. Lizard Club, a week ago Friday.”

“We’re not doing this.” I shrugged Julie off my shoulder and stood, draining my Bloody Mary. “Only sad and desperate people do that.”

Marcia narrowed her eyes at me. “Are you calling me sad and desperate?”

Julie and I exchanged glances and Marcia huffed out an exasperated sigh. “None of us are. But you, Ms. Charley, could have any guy you wanted.”

“Pretty much has.” Ice ducked the pillow I threw at her.

“It’s true,” Marcia agreed, typing. “You’re like the fairy princess of good fortune. So if anyone is going to come out well from a Missed Connection ad, it’s you.”

“That’s different.” It really was. I groped for a good reason that it was. “That’s just, like, putting myself in the way of serendipity.”

The front door opened and Amy, blonde hair in a ponytail, face bright from her morning run, bounced in. “Hey guys! Whose fat cowboy?”

Marcia ducked me, turned the tablet off and smiled smugly. “Already done. I’ll watch the replies for you. You’re welcome.”

“How did you even know what to say? You need the little code in there—like the other ones. You’ll know it’s me if.”

“Do you all spend your time thinking up ways around the Rules? Give me that tablet, Marcia.”

Marcia slid the tablet under the couch cushion and sat on it, looking stubborn.

“Dammit.” I grabbed my phone and plugged in the URL, found the new posting. “To the mystery man who kissed me at the Lizard Club – w4m. A week ago Friday, last dance. We knocked on heaven’s door, exchanged a passionate kiss, the clock struck the witching hour and you disappeared. No glass slipper to be found. Give me another clue? Tell me what I was wearing and I’ll meet you. –Cherry Bomb. Oh my God—I can’t believe you gave me that name.”

“Thanks.” Marcia beamed. “Like I said, I’ve mentally composed thousands.”

“Besides, how do you know so much about what happened?” I frowned at Marcia. Cherry Bomb.

“We all did.” Amy swigged her fruit juice. “It was exceptionally romantic. Sexy, in that smeared lens way.”

“It’s true,” Ice said. “He watched you for a while—for several dances—and then made his move. I think he planned to kiss you all along.”

That kind of stopped me. “Really? Why did he wait so long though?”

Marcia looked into space, playing it back in her head, a memory reel I wished I could see. “I don’t know. He was maybe making up his mind.”

Ice frowned. “He came in and stood by the side of the dance floor, watching you, like he’d expected you to be there. I thought maybe you knew him from the theater or something.”

“But you locked lips anyway.” Julie rolled her eyes.

“That’s how he looked.” Marcia curled a lock of her hair around her finger, eyes dreamy. “Completely swept up. Mesmerized. And then the way he just kind of wooshed you into the dance, seducing you into that kiss.”

“Like I said,” Amy pulled out her ponytail tie and shook out her blonde hair. “Very sexy-romantic.”

It was five minutes. His hand on the small of her back. His eyes watching like there was no one else in the crowded club. His body a breath away from hers. A kiss full of heat and need and promise.

But then the stranger disappears. And Charlotte Emory can’t forget him. Worse, according to the dating Rules she and her four best friends swear by, all she can do is post an ad online. No names, no numbers. Just a missed connection – and the hope he’ll meet her, and see where another dance leads.

Except Mr. Mystery has his game, too, and he isn’t playing for only one night. He tempts Charley into a daring exploration of power, lust, and suspense, where even the most innocent requests sound indecent…and the indecent ones make her burn all night.

If she plays by the Rules, they’ll never get past teasing each other. But rules were made to be broken…

Her award-winning fantasy romance trilogy The Twelve Kingdoms hit the shelves starting in May 2014. Book 1, The Mark of the Tala, received a starred Library Journal review and was nominated for the RT Book of the Year while the sequel, The Tears of the Rose received a Top Pick Gold and was nominated for the RT Reviewers’ Choice Best Fantasy Romance of 2014. The third book, The Talon of the Hawk, won the RT Reviewers’ Choice Best Fantasy Romance of 2015. Two more books followed in this world, beginning the spin-off series The Uncharted Realms. Book one in that series, The Pages of the Mind, has also been nominated for the RT Reviewer’s Choice Best Fantasy Romance of 2016 and is a finalist for RWA’s RITA Award. The second book, The Edge of the Blade, released December 27, 2016, and is a PRISM finalist, along with The Pages of the Mind. The next in the series, The Shift of the Tide, will be out in August, 2017. A high fantasy trilogy taking place in The Twelve Kingdoms world is forthcoming from Rebel Base books in 2018.

In 2019, St. Martins Press will release the first book in a new fantasy romance series, Throne of Flowers.