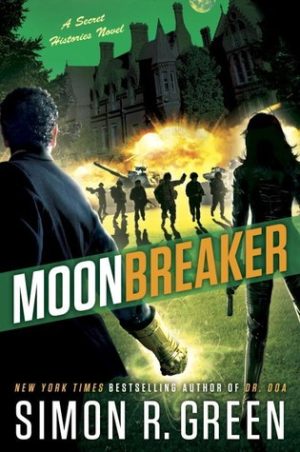 The only sounds disturbing the graveyard quiet came from Molly.  Her language started out bad and quickly escalated, as she swept her hands back and forth through the empty space where the dimensional gateway had been just a few moment before.  She was trying to find some trace of it with her magics, so she could call it back and force it open, but she wasn’t getting anywhere.

She turned around, and there was Alpha Red Alpha, towering over us.  The great dimensional engine itself.  Molly glared at it.

“That wasn’t there a moment ago.”

“So what was it doing?  Hiding from us?”

I shrugged.  “That’s Alpha Red Alpha for you.”

I looked carefully at the massive and never fully understood mechanism, designed to be the Droods’ last line of defence.  So that if the Hall ever found itself faced with a threat that couldn’t be stopped, the engine would translate the whole building into another dimension, another earth, where it could safely remain until the threat was over and the Hall could be brought back again.

Either the family here never got a chance to use it, or Edmund did something to it.

Alpha Red Alpha: a gigantic hour-glass shape immersed inside a frozen waterfall of gleaming crystal, shot through with sprawling circuits, like ragged veins.  It was hard to make sense of, hard even to look at, as though it existed in more than three dimensions… And if there were any controls, I couldn’t make them out.  Only my uncle Jack, when he was Armourer, really understood Alpha Red Alpha.

“Can you magics get us home, Molly?” I said.  I was pretty sure I already knew the answer, but I needed to hear her say it.

“Not a hope in hell!” Molly scowled at Alpha Red Alpha as though she was seriously considering giving it a good kicking, just on general principle.  “I don’t even know where home is from here!  You can’t navigate all the different Earths and all their different histories without being really sure of the exact Space/Time coordinates involved.”

“And there’s no trace left of the dimensional Door we came through?”

“No.”  Molly’s shoulders slumped and she suddenly looked tired and worn-down.  We’d put a lot of effort into chasing Edmund, and it was catching up with both of us.  “Edmund must have locked the Door from his side, using the other Alpha Red Alpha.”  She looked at me sharply.  “If he’s smart enough to operate it, why can’t you?”

“Because he’s spent ages learning how to work it,” I said.

Molly nodded reluctantly.  “Does this machine look the same to you as the one in our world?”

“Hard to tell,” I said.  “Just looking at the damn thing hurts my eyes.  It’s … different, but I couldn’t tell you how.  I am sure it wasn’t standing here the last time we visited this Armoury.”

“Edmund must have moved it,” said Molly.  “So he could set his trap.”

“How?” I said.  “Look at the size of it!  You couldn’t shift something this big with a power loader and a stick of dynamite!”

“I don’t know,” said Molly.  “And don’t you snap at me, Eddie Drood!  Edmund’s just another version of you, which means really this is all your fault.”

“Somehow I knew it would be,” I said.

We shared a quick smile, and went back to studying the dimensional engine.  It stared silently back at us, giving away nothing.

“Edmund must have been coming and going between the two Earths for some time,” I said.  “But how could he have used my Hall’s Alpha Red Alpha without the Armourer or his staff noticing?”

“Without my noticing?” I said.  Molly started to bristle again, and I realised we were dangerously close to another argument we couldn’t afford, so I changed the subject.  “We have to get back to our wold, Molly.  My whole family is in danger form Edmund as long as he’s running around our Hall, unsuspected.”

Molly leaned in suddenly and kissed me.

“Because that is just so typical of you, Eddie–thinking of others, instead of yourself.  We have to get back because you’re running out of time.”