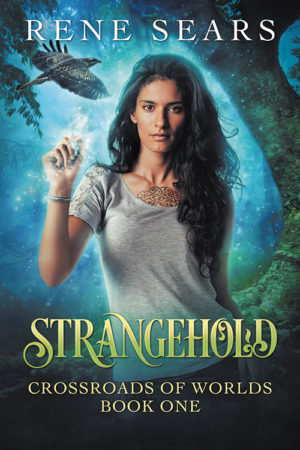 The last time I saw my sister, Gwen was hugely, radiantly pregnant, and asking me to be happy for her.

This time she was hunched over a coffee, wan and tired, while the twins stacked blocks and knocked them over at her feet. As I tried to find the right words, one girl knocked over the other’s tower before she was done building, and a squall of anger disrupted their play, a brief tempest of disappointment that the world wasn’t going according to her plan.

I knew exactly how she felt.

Shadows ringed Gwen’s eyes, proof of sleepless nights, but a darker circle marred her left eye, bruise-purple even beneath the heavy foundation she had smeared over it in a futile attempt at concealment. No amount of makeup could hide the swelling; her left eye looked half asleep, while her right was haunted, searching. She winced as she took a sip of coffee and I stopped searching for the right words and let the wrong ones come out, the ones I’d been trying not to say.

Gwen stared at me, then burst out laughing, and some of the tension left the knot between my shoulder blades. If Gwen could still laugh like that, maybe things would be all right, somehow. “Ow.” Gwen winced again, touching the puffy flesh at her eye socket. “Oh, Morgan, it’s not Elm. He would never do this to me. It’s her.”

I leaned back and tugged at my sleeves, hoping to smooth down the gooseflesh before my sister noticed. There was only one person Gwen would refer to solely by a pronoun like that.

Gloriana, the queen of the fae.

I had only had the dubious pleasure of seeing the queen once before, and it was not an experience I was eager to repeat. I had never really understood how Gwen could bear to live in Faerie. “She can’t. You’re the ambassador from the Association”

Gwen’s lips twisted, as though she’d tasted something far bitterer than coffee. “That doesn’t mean as much as it did.”

One of the girls squealed at my feet, and I leaned down to pass back the block that had gotten caught in the cuff of my trouser leg. Dread curled in my stomach, churning the heat of my drink into ice. “What happened?”

“I don’t know exactly. She thinks someone overhill is trying to attack Faerie. She thinks I know something. She sent one of her enforcers to ask me about it.”

I winced and stirred my coffee. The fragile peace between human and fae had lasted four decades. I had no desire to see it slip away. My mentor, Marcus, had told me stories of how it had been before the truce: will o’ the wisps and phoukas luring the innocent to their deaths, duels between fae knights and human spellcasters, fae raids against human towns, using glamour to lure people into Faerie. The Queen’s Blade carting off casters in the night, or leaving them dead where they slept.

Not that humans had never been aggressors, but before metal became widespread, we’d had little defense The tide had turned around the industrial revolution, and stories of the fae became myth and superstition. The general human population had been able to forget that Faerie had ever been a threat, that Faerie ever existed.

Those of us with magic never had.

“Does she think you had anything to do with it? Or the Association? There will always be idiots, but she has to know no one official would do anything to endanger the truce.”

Gwen’s smile was old, or maybe that was the swollen eye. “Does it matter? She sees a threat.”

Gwen’s shoulders relaxed infinitesimally The hesitation stung, though it shouldn’t. I had made no secret of my disapproval of her choices. Gwen’s fingers tightened around her coffee cup. She looked at the web of cracks in the plaster of my kitchen ceiling as if she could find answers there.

Morgan Tenpenny has retreated from her painful, magical past, choosing to live quietly as a guardian of one of the gates between worlds. But her sister Gwen is married to a lord of the High Court of Faerie—and when Gwen asks her to protect her nieces, it’s time for Morgan to emerge from her seclusion. The gates to Faerie have inexplicably closed, and no one knows why, not even Falcon, the fae Morgan finds trapped on her side of the gate.

As a devastating illness that only affects magic users starts to sweep through the country, Falcon tells Morgan of a way to reach her nieces in Faerie through a mysterious place called Strangehold—if Morgan can trust that Falcon is all that he seems. But with the Queen of Faerie increasingly defensive of her borders, even their combined powers may not be enough to win them through.

With relations between fae and human falling apart and a deadly illness threatening all of her old colleagues, Morgan finds that her past isn’t as dead as she’d thought. She must navigate the threats in time to save her nieces—and just maybe the world.