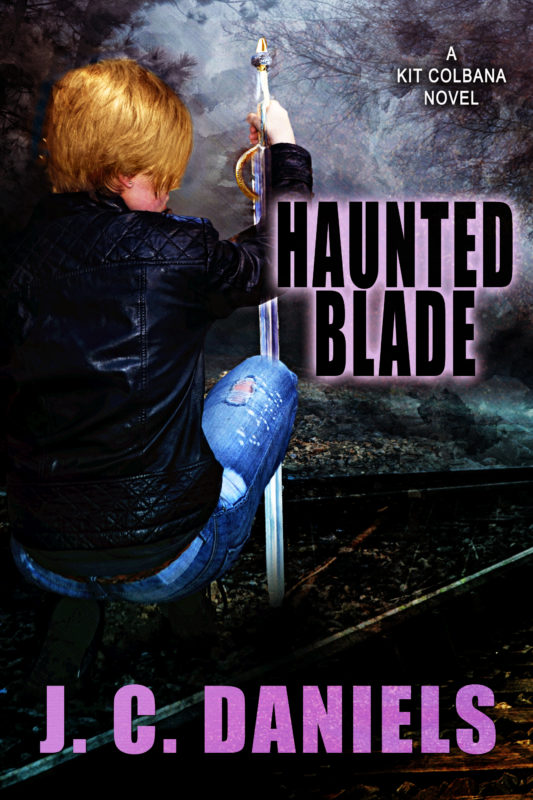 Never let it be said that Kit Colbana had ever been given the easy road. Or even the semi-paved road. Only weeks after dealing with the mysterious—and murderous—being called Puck, she’s got another killer on her hands. Perhaps even two.

As the body count racks up, there’s an imbalance of power, particularly among the vampire population, and Kit must yet again deal with ugly memories as one of the monsters who tried to break her is set free to deal with the imbalance of power. Yet while a power struggle rages in East Orlando, there’s another, more subtle battle taking place and Kit feels like the center of it all.

“You’re trying to distract me.” I tugged my shirt down only to realize at some point, he’d already gotten my bra unfastened.  Swearing, I adjusted that and moved so that the table now separated us.  “Not funny, Damon.”

“I wasn’t trying to be funny.” He tugged at his jeans and went to stretch out on the couch, watching me with heavy lidded eyes.

So he was hiding something—and it was a wasted effort because I knew what it was.

“I already know you met with Malcolm. And apparently, you’re distracted—that makes me think you’re worried about something,” I said, pacing closer to him.  “Or you’d figure out how I know.”

His nostrils flared and his body tensed.

He didn’t move from that lazy, slumped position, but his lids lifted and the dark pupils of his eyes flared, darkening his deep gray eyes to near black.  “You’ve talked to him…and Marie.  Both in one day.  I didn’t know you even knew them.  Ambitious, kitten.  You investigating me again?”

“I’m not laughing.” He reached up and caught the front of my jeans, tugging hard enough that he pulled me off balance and I ended up falling onto his lap.

He wrapped both arms around me, holding me tight even when I tried to wiggle into a less-awkward position.

“Damn it, you’re a caveman, sometimes,” I said, jabbing him into the gut and twisting around until I was somewhat comfortable. He relented and loosened his grip, letting me sit straddling his lap. “For the record, I am not laughing either.”

Jabbing him in the chest, I added, “No, I’m not investigating you, you dumb ass. He’s telling me that he wants me to do a job—says there’s a blade he wants me to find.”

Damon blinked, the action so slow it was almost comical. He did it a second time, this just simply closed his eyes and shook his head.

“You’re not taking the job,” he said after almost a full minute of silence.

I gave him a withering look.  “You’d do better to reword that, pal, because if I even thought you were trying to dictate how I could work and who I could work for, the two of us would be having the fight to end all fights, right before I kicked your ass out of my apartment, for like…forever.”

But if I expected those words to bring about any apology, clearly, I was mistaken.

Slowly, in a move that somehow conveyed all the power in his big body, Damon rose to his feet.  His hands hung loose at his sides as he studied me, head cocked.  “If Marie was here talking to you, and if you’ve been talking to Malcolm, I’m assuming you’ve already figured out a crucial detail.”

“Just what detail is that, big guy?” I asked, chin going up.

“The prick is dangerous.”

“Newsflash—I knew that quite some time ago.  I didn’t need to talk to Marie, or him, to figure that out.  I steer clear of him anyway.”

Stalking close, Damon reached out and hooked his hand around my neck, drawing me to my toes as he hipped his head.  “Then why are we having a problem here?”

I bit his lower lip, using that as a distraction.  It almost worked.

The knee I tried to drive up between his knees worked better.

Still, between the two, I was able to twist away from him and evade his grasp as I moved farther away.  As he turned toward me, blood welling on his lip, I held up a staying hand.  “We’re about to have even bigger problems if you don’t calm the hell down,” I warned him.

He held his position, watching me with glittering eyes as he swiped the back of his hand over his mouth. The small smear of blood that remained, he cleared with a flick of his tongue.  “We’re going to have a reckoning about this soon enough, you got that?”

“I’m scared.” I curled my lip at him, mostly to piss him off—I was plenty pissed myself.  “Do you honestly think I’m stupid enough to work for him?  He’s either fae or an ancient—or both—and you think I’m that crazy, even after what went down with Puck?”

Damon’s brows shot up, then slowly, his face relaxed.  “You know what he is.”

He rocked back on his heels, still eying me narrowly.  “Since you know what he is and you’ve already said you don’t plan to work for him…what’s the problem?”

“You!” Huffing out a breath, I crossed my arms over my chest.  “You big ass, you don’t get to tell me what I can and can’t do!  You’re not my alpha! You’re not my sugar daddy, my boss or my master.  I love you, Damon, but you don’t get to control me—I don’t obey your orders but you think you can growl and snarl at me and I’ll meekly obey, after all this time?”