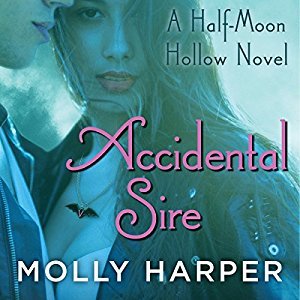 Accidental Sire opens at the conclusion of Big Vamp on Campus novella. Series part-timer Ben is smitten with Ophelia’s human friend Megan. But just as they say goodnight, Megan is accidentally struck by a heavy weight and killed. A volunteer vampire agrees to sire her and then vanishes. When Megan wakes after only 24 hours and has two sets of fangs, Jane Jameson and the Vampire Counsel swoop in to discover what is going on and mentor the newly made vampire.

It’s been a few books since the story has focused on the original Jane Jameson group and Half-Moon Hollow, but Accidental Sire brings back all the favorites of Half-Moon Hollow and the Council offices. Whether or not it is the return to the familiar setting and characters, Accidental Sire just feels good. Little issues I’ve had with the previous books were nonexistent. The story is tight and the characters likable, without annoying habits or too-stupid-to-live flaws.

While Ben and Megan’s story is on the light side, it’s very much appropriate for the college-aged couple. They have an adorable meet-cute, but the whole being turned into a vampire thing puts a damper on their budding romance. I enjoyed the slower pace, which was filled with laugh-out-loud moments.

A Molly Harper audiobook wouldn’t be the same without the terrific work of Amanda Ronconi. She has the perfect amount of southern charm, bundled with sharp wit and droll sarcasm to fit Ms. Harper’s characters. I swear I can see Ms. Ronconi roll her eyes when portraying Jane. However, while I love Amanda’s narration, it is very difficult to hear differences between her characters at times. This is compounded by the fact that each Half-Moon Hollow book is written in first person narrative, with each book featuring a different female lead. So it makes for some difficulty following who is speaking at times, most noticeably between the female characters.

Accidental Sire is a wonderful mix of Molly Harper’s trademark humor, a sweet romance, and an intriguing mystery. I laughed out loud more than once at silly jokes referencing pop culture and people just being silly. Every character has a bit of snark, and Amanda Ronconi gives the dialogue just the right emphasis, pulling off the sarcasm seamlessly.

Story Rating: A-
Narration: A-

In Molly Harper’s newest paranormal romantic comedy, Ben, Gigi’s old boyfriend, must find a way to save his new love after a freak Ultimate Frisbee accident. But will she want to live after she finds out how Ben had to save her?

In this exciting addition to Molly Harper’s beloved Half-Moon Hollow series, the focus is on Gigi’s ex-boyfriend Ben. When his new girlfriend is killed in a freak Ultimate Frisbee accident, he’s determined to save her, no matter the cost, even if it means bringing her into the darkness of vampire life!