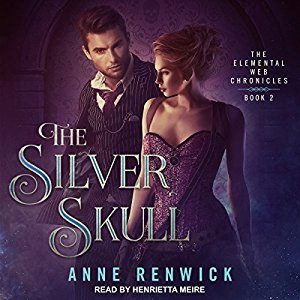 As the daughter of a prominent Duke, Lady Olivia is expected to marry, produce heirs for her husband, and run a successful household – all things she was taught to do. Except Olivia is also a Queen’s agent, trained to marry a politically motivated target and report on his activities. Olivia sees this as a means to an end; becoming a widow and then a field agent. Tired of waiting for field assignment, Olivia takes matters in her own hands when she decides to follow Lord Ian Rathsburn.

Ian is a man with a tarnished reputation; a former Queen’s agent whose life work was stolen and is being developed by the enemy: Germany. Yet when his enemies kidnap his sister, Ian must act traitor to his country and help the Germans further develop his ideas, working along side his former friend – the man who stole his work. Finding stowaway Lady Olivia on his dirigible, Ian isn’t certain if she’s a bubble-headed woman looking for a husband, or an agent of the Queen looking to bring him in.

The second story in Ms. Renwick’s wonderful Elemental Web Chronicles is equally exciting and doubly adventurous as its predecessor. The story not only takes readers across the sea to Germany, but also opens up the setting to the much larger world. The world building continues as new characters are introduced, some with long-term potential. I feel like the entire Elemental Web Chronicles universe has expanded immensely after just one additional book. Even though things are growing within the series mythos, The Silver Skull is a tightly-woven story. The author does a fabulous job bring her world and characters to life without overwhelming readers/listeners.

The romance between physician Ian and engineer Olivia is entertaining. I love the use of “scientific exploration” as a means for examining their mutual and intense attraction. They banter and play as only two geeks could, which is very enduring to me. I appreciate the conundrum of being spies and the need to keep secrets versus creating a solid rapport  based on honesty. Their romance burns slowly, but the unfulfilled desire keeps pulling the two together.

At first I was concerned that the similarities between The Silver Skull and the first title, The Golden Spider, would make for a repetitive listen; a scientist working to save a sibling, confiscation of experimental equipment, etc. However, the stories truly are very different. This story is very dark. Rathsburn’s sister, Elizabeth, is not only being held against her will but she’s being experimented on, and she’s been forced into an engagement to the evil faux doctor. There are several scenes that left me a bit uncomfortable because of the extent of coercion and/or “torture” involved. But with that said, the story never ventures into gratuitous violence, and there is a happy ending!

Once again, I adored the narration by Ms. Meire. Her “proper English” accent fits my ideas of how these ladies and lords would speak. She tosses in some lower-brow voices, as well as German and Chinese accents. Each male and female has their own, unique voice, with both genders well-presented.

While at first I was thrown by what appeared to be a “one-eighty” in Olivia’s character between the first and second books, I grew to appreciate the extent Olivia goes to find her own happiness out of life, regardless of her mother’s expectations and desires. Finding love despite one’s preconceived notions, while accepting someone for who they are in earnest, is the true message behind this exciting steampunk adventure.

Lady Olivia is not all she seems.

Trained for marriage to an assigned political target, her skills lie in programming household steambots to serve tea, dress her hair… and sound the alarm while she picks locks and listens at doors. Humiliated by a failed assignment, she decides to redeem herself by tailing a suspected double agent.

Lord Rathsburn must flirt with treason.

Struggles to cure a horrible disease have met with unexpected complications. The cells he engineered can make a man’s bones unbreakable, but the side effects are fatal. He believed the research terminated… until his sister was kidnapped by a German count. Her ransom? A cure.

Arriving together at a crumbling castle, an impossible task is set before them: cure the count’s guardsmen. Amidst their fake marriage, a very real growing attraction, dying guardsmen and escalating hostilities, Lady Olivia and Lord Rathsburn are thrust deep into the world of international medical espionage from which there may be no return.