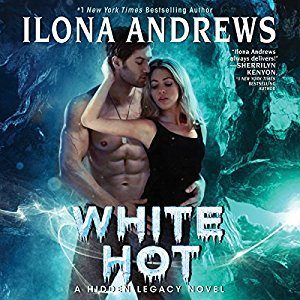 Listening to the audiobook of White Hot is a “reread” for me. I reviewed the book in May 2017, and my review still stands as I originally wrote it. Here is an excerpt from my original review:

“The overall and book-specific stories are both equally engrossing. The layers and complexity make the book fascinating rather than confusing. The conspiracy and plot are smart and interesting. The action is solid and edge-of-your seat.

“The romance between Nevada and the little understood Rogan also blossomed during White Hot. Rogan continued his relentless pursuit, but also opened up to Nevada, realizing she can match him. She may not be his equal, and he sometimes does things to “protect” her which only frustrated her, but he’s learning how to allow her to make her own decisions. There are many hurdles to jump, and I really want them to make it.”

By listening to the book, I picked up plot nuances that I missed when reading the book the first time. However, It is Renée Raudman’s performance that makes the story so much more. While the writing team of Ilona Andrews is an amazing storyteller in its own right, Ms. Raudman adds so much feeling and emotion to their stories that I can’t help but get choked up every time I listen to one their books. She breathes life into these amazing characters and tales, making them ones I would listen to again and again. She takes an A book and makes it an A+.

In the end, White Hot is an amazing, entertaining story, and coupled with Ms. Raudman’s talent, the book is unforgettable.

My Rating: A+
Narration: A+

Nevada Baylor has a unique and secret skill—she knows when people are lying—and she’s used that magic (along with plain, hard work) to keep her colorful and close-knit family’s detective agency afloat. But her new case pits her against the shadowy forces that almost destroyed the city of Houston once before, bringing Nevada back into contact with Connor “Mad” Rogan.

Rogan is a billionaire Prime—the highest rank of magic user—and as unreadable as ever, despite Nevada’s “talent.” But there’s no hiding the sparks between them. Now that the stakes are even higher, both professionally and personally, and their foes are unimaginably powerful, Rogan and Nevada will find that nothing burns like ice.