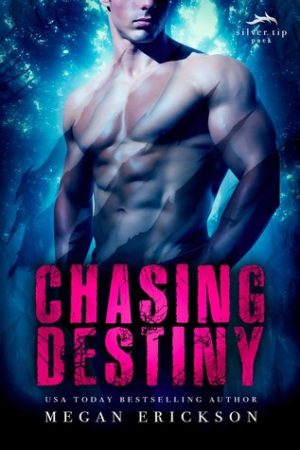 Bay has had something missing in his life since losing his best friend and future mate when they were teens. But to lose Nash again after he was rescued then sacrificed himself to save the Silver Tips from a Nowere attack, left Bay empty and near ruin. Volunteering for a highly dangerous and potentially deadly scouting mission, Bay finds life again when he discovers Nash living in isolation with the Whitethroats.

Nash has spent over half of his life in deplorable conditions as a prisoner; used for experiments and worse. Now that Bay has found him, he’s torn between his love for Bay and a pack long forgotten and the need to protect them from his once captors. With warring emotions, Nash walks the fine line between redemption and hell.

Fans of good ol’ shifter romance and sizzling m/m lovin’ rejoice! Ms. Erickson’s Silver Tip Pack series is just what you need. After enjoying the world building and character development of first book, Daring Fate, I found Chasing Destiny all the more intense and exciting. The raw need between Nash and Bay is tangible: emotional and sexy. The years of unfulfilled lust and love explode as the pair reconnects. It’s a push and pull story, with a solid foundation established when the pair was younger. While Nash can do little to control his body’s need to be with Bay, his heart and head push him away, thinking he is too broken to be loved by Bay. Their story is emotionally gripping and satisfying.

While the romance between first book couple Reese and Dare was the “True Mate” kind, I am thankful that Ms. Erickson did not utilize the same for Nash and Bay. True Mating is rare and special, but the author shows us that it isn’t necessary for true love to develop between a couple, leaving no question of how exceptional Bay and Nash relationship is. Additionally, I appreciate that the author gives Nash the time he needs to be with Bay, rather than skip over his years of physical and mental abuse. Yet, they are firmly a couple before the big climax of the book, solidifying their connection in a powerful way.

Ms. Erickson continues to develop her world, as we learn more about surrounding Were and werewolf packs, making connections with other packs, and witnessing anomalies involving the zombie-like Noweres. Having to spend less time explaining the world allows Chasing Destiny more freedom for in-depth storytelling. I throughly enjoyed the action, as well as the quieter pack moments.

Chasing Destiny is a wonderful sophomore story from the Silver Tip Pack series. Filled with exciting action, intense emotions, and ultra-smexy romance, I found it difficult to put down. I eagerly await the next story from Ms. Erickson’s delightful series.

Some live on memories…

Almost dying during a pack uprising has a way of shaking things up. I’m no longer Mr. Laid Back now that there’s an itch under my skin I can’t scratch.

On a volunteer mission that goes beyond the walls of our compound, we enter the territory of a pack long thought dead, and find ourselves on the business end of their spears.

What I’m not prepared for is what I find within their walls—The one shifter I never thought I’d see alive, the one I’d mourned twice, the one I’d always loved. He is alive, and if I have anything to do with it, he’ll stay that way. But he’s got secrets, and exposing them could lead us to an enemy worse than the bloodthirsty undead shifters wanting to kill us all…