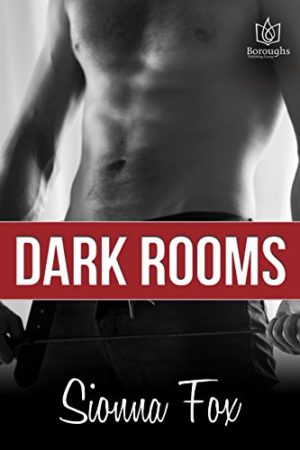 The word play of the title, Dark Rooms, isn’t lost on me. I actually love it and think it’s perfect for this book.

This was a short—took me under two hours to read it. There were a lot of things I liked, and some things that were a little meh for me. Then again, this could be **just** me.

I really liked the character development for Wes. I think we got a well-rounded story about him, and his POV was the strongest. He was my favorite character, unless you count Ed. I loved how we watched Wes develop and grow. At the beginning, he was enchanted by Aimee—but by the end, his feelings were obvious. Even when things were topsy-turvy for him, he seemed to keep his cool and roll with the punches based on what Aimee needed…or so he thought.

Aimee, on the other hand, didn’t have growth through most of the story, and that bothered me. I didn’t get to see much—even in her POV—about why she was the way she was. Her change seemed instantaneous and we didn’t get to see the evolution of her thought process much. I understand a big reveal and all the plot devices rather well, but there could have been more at the end.

I had a couple concerns about the portrayal of the BDSM world—specifically house parties and health concerns. However, I respect an author’s right to request a leap of faith from her readers in the interest of telling a story. Kids, if you go to a kink party, make sure there’s a mentor you get to hang out with the first time at a new place. Someone to explain house rules, etc. Oh, and test results. And don’t share toys such as floggers, etc., without knowing they’re properly disinfected between uses—one doesn’t know **where** those things have been. There’s some things in the blurb that were misleading to me as a reader, too. I felt that Wes was less experienced than indicated in the blurb based on the history presented (and that I liked a lot) in the story. I’m going to take this moment to talk about good tops. First, they’re mentored. Second, whip-wielding—this is like an event or sport one trains for over the course of YEARS. Third, I prefer to see Doms with a realistic grasp on their Dom-ness unless I’m reading paranormal. I liked the fact that Wes was polite and thoughtful—don’t get me wrong—but what was maybe a left out part was how he actually became a good Dominant. Because, he seems to be one.

Even though there were a few things I’d have liked to see more of in Dark Rooms, I felt this short, spicy romp would be a great read during a commute or flight—it’s the right length, and has a satisfying ending. I look forward to reading more from Ms. Fox.

When they met on Friday night, he dominated her. When he walks into her photography classroom on Wednesday morning, the question is, who’s in charge.

Women beg Wes Oliver to dominate them in darkness. In the light, he’s finally getting his life back on track. College is priority number one—until he finds his new professor is the delicious Sub who ran out on him last weekend, a brilliant and mature beauty nothing like the girls who usually kneel before him. Suddenly, this is no longer just about pleasure. This is about his heart.