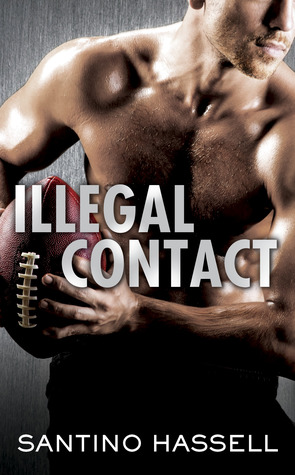 Santino Hassell has been a favorite author of mine for some time now, and, while I fully expected to like Illegal Contact, I wasn’t prepared for how much I completely loved it. Having been raised on college football in the South, I wondered if my own limitations might affect my reading of a story about a pro team in NYC. Turns out, I needn’t have worried. Mr. Hassell made the whole affair feel both technically sound, as well as inviting, allowing the personalities of the characters to take center stage.

Punnily-monikered tight end Gavin Brawley could very easily have been a stereotype of every “misunderstood-angry-athlete” ever written, but that wasn’t the case. Despite the technical applicability of all three of those things, Gavin deserves a full retraction of the hyphens and quote marks, his cynicism about the press and the public proving just as well earned in the present as it was in his past. Disinterested in either fame or retribution, however, his true love is simply playing football. He knows how slim the odds are that he was able to find salvation in the sport, and, as long as he has it—and the loyalty of his two best (and only) friends—that’s all he really needs. At least until Noah arrives.

After having been recently fired from his job at an LGBT Youth Center in NYC due to his own choices and the bias of those in charge, Noah Monroe is more than a little bitter. Yet, from his first inner snipe about Gavin appearing to be the “ideal candidate for society’s irritating version of masculinity,” it’s clear that Noah has some prejudices of his own. Still, he is fiercely protective of those he cares about—one of several traits he and Gavin share—and, even though he might be preemptively defensive, he’s willing to really listen and open his carefully guarded margins to include others.

Though it certainly doesn’t ignore familiar headlines often associated with professional sports—players’ reputations, public opinion, privacy (or the lack thereof), money, etc.—Illegal Contact gets its heart from its attention to the things you don’t normally see. Gavin’s anger over the exploitation he’s not supposed to notice, Noah’s determination to avoid repeating the past, and their mutual aversion to and unwillingness to play “the game” all coalesced into what amounted to a wonderful reading experience.

Another element I appreciated about Illegal Contact is that, not only did it give me some things to think about, it’s also unexpectedly sweet and fun. Beginning with a mutually-launched series of incitements and reactions, the initial animosity between Gavin and Noah quickly leads to a contemplative avoidance, and they eventually arrive at a transparent kind of understanding that would have been impossible without the enforced isolation of Gavin’s house arrest. Never trite, Noah and Gavin are snarky and quick, playing off each other with a temptation-drenched antagonism that ensnared me from the very first chapter.

Having yet to read something I didn’t like by Mr. Hassell, I’m unapologetically pleased to add Illegal Contact to that growing list. Gavin and Noah were more complicated and winsome than I imagined they’d be, finding similarities in the oddest of places and a haven where they least expect it. Throughout the narrative, I was charmed by both characters, and never did manage to choose a favorite. The house itself was an interesting sort of prison, and made me think that, sometimes, sanctuary might just depend on what you’re running from. Even the secondary characters held their own, for good or ill, and the teases woven by their interactions for the next story worked on me far too well. If The Barons was a gamble as a series, then I want in for the duration.

New York Barons tight end Gavin Brawley is suspended from the team and on house arrest after a video of him brawling goes viral. Gavin already has a reputation as a jerk with a temper on and off the field—which doesn’t help him once he finds himself on the wrong side of the law. And while he’s been successful professionally, he’s never been lucky when it comes to love.

Noah Monroe is a recent college grad looking for a job—any job—to pay off his mounting student debt. Working as Gavin’s personal assistant/babysitter seems like easy money. But Noah isn’t prepared for the electrifying tension between him and the football player. He’s not sure if he’d rather argue with Gavin or tackle him to the floor. But both men know the score, and neither is sure what will happen once Gavin’s timeout is over…