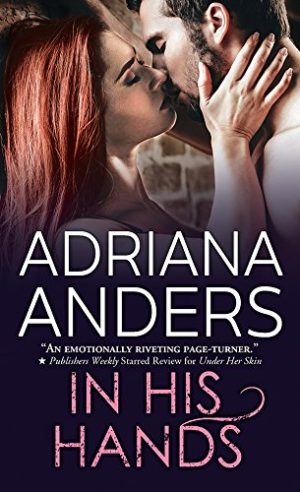 In His Hands
Author: Adriana Anders
Reviewer: VampBard
Rating: B+

When I was reading In His Hands, I felt like I was transported up a lonely mountain and planted in a vineyard. The feel of the vines and the selection process—which to cut and which to leave—reminded me of working with my grandmother on the concord grapes she had in her back yard. I’d listen to her talk about pruning the canes back and making sure the vines stayed on the fencing she’d made my dad set when he was a kid. As an adult, I lived in her house and tried to reclaim the vines after years of them running amok. It wasn’t an easy job.

But, my nostalgia left as soon as I figured out what the heck was going on, on the top of that mountain. It…wasn’t pretty, but Ms. Anders didn’t focus on the abuse Abby suffered at the hands of others. The story focused on trust. Not the cult in which Abby was raised and how twisted and backward their beliefs were. I may have thrown up in my mouth a little during a few memories.

Abby is a little spitfire. I’m not sure whether I can fully stomach the  whole cult mentality. I’m pretty sure I would’ve been down off the mountain before I’d been married off to some old geezer. I get the ‘only way out is death’ mentality, though. It’s just super hard for me to connect with.

Which brings me to Luc. As a recluse and neighbor to the cult, Luc’s lack of experience with positive relationships in his life played out beautifully in this story. I felt a true connection to him because he listened to everything his grandfather said about growing grapes—and he applied it to the small crop of grapes he cultivated every year to sell to vintners in the area. I could almost hear my grandmother saying some of the same things about her vines. I’m not sure if I missed how long Luc had been on the mountain or if I wasn’t able to retain it due to nostalgia. It felt like he’d been there a few years, though. I even got the whole family thing—but for entirely different reasons. What I adored about Luc even more than the trip he took me on down memory lane was the fact that he was FRENCH. Ugh. My weakness.

Even though Abby was pretty much innocent in the ways of the world, Luc didn’t take advantage of her like he could’ve. I admired him for that, and I was glad it was someone like him that had line-of-sight to the fence separating the property.

Trust and loyalty are sometimes fickle bedfellows, however. The one element of the story—Abby’s loyalty to some within the cult unable to speak for themselves—I sometimes struggled with resulted in an element of surprise for me. I did struggle with some of the content—but I knew what I was getting into when I started reading. Overall, I really enjoyed the interaction between Abby and Luc, and I’m eager to read more by Ms. Anders.

Abby Merkley has been a member of the Church of the Apocalyptic Faith since she was a child, and there’s no way out―except death. She will fight the odds to survive, but there’s no one in the world she can trust, nowhere she can run that the cult can’t find her…until her handsome, brooding neighbor takes her into the safety of his arms.

Luc Stanek craves a quiet life. But he doesn’t hesitate when a desperate woman lands, bloodied and branded on his doorstep. Soon he finds himself drawn into her chaotic world, caught in the center of an apocalyptic war…and determined to save the fierce beauty no matter the cost.