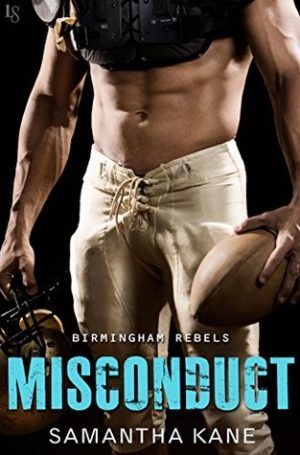 Having survived a roadside bombing in Afghanistan, Carmina moved to Birmingham to be close to her best friend (and only other survivor) and to get away from her overprotective family. Now that she’s gotten on her own two feet, Carmina is ready to try dating, and sex, again. Rebels’ rookie, Tom, is the perfect man for the job, but she also can’t stop thinking about Tom’s best friend and roommate, Danny. Not sure how to proceed, Carmina rely’s on Tom’s help to move forward.

After nearly giving up on this series after the second title, I have to say I have rather enjoyed the last two books. Misconduct explores the aspects of a ménage within the confines of a safe and mostly accepting community. While it’s the fourth such book in the series, the story of Carmina, Danny, and Tom’s relationship is its own. With Tom as the only one ready to explore his deepest fantasies, it takes a while for the trio to form.  I like that Ms. Kane allows both Carmina and Danny to express their reluctance and fears over a non-traditional relationship, with Danny agitated and angry over unwanted advances. There is no sudden “flipping the switch,” making everything all good. It takes time. It gives the entire situation a realness that wasn’t present in the first two books of the series.

I also appreciate that the focus of Misconduct is the budding relationship and connections between Carmina, Danny, and Tom. Yes, this is a football book, and the author puts her characters in the game. However, while football is the setting for the book, it isn’t a guiding force over the romance, as it was in the first two titles. Sharing the interpersonal impacts of the ménage, rather than the impact to the team, creates a more heartfelt story.

I like that the romance and sex scenes are driven by the characters and their desires, rather than the other way around. This is more of a “slow burn” romance, in that it takes some time for the trio to work out. However, it is still smoking hot – just give it time.

It could have been just another ménage story with lots of sex, but Misconduct is so much more. The author take time to develop solid characters who dictate the storyline. Outside the fame and football, Danny, Tom, and Carmina are real people, fearful of opening up and accepting something outside the norm.

Rookie running back Tom Kelly loves the perks of football stardom. Men, women—there’s no shortage of companionship for a pro athlete who’s hot, young, and willing, and Tom is definitely willing. But deep down he wants a committed three-way relationship, especially if the female in the middle is Carmina de la Cruz. The undeniably sexy Army veteran may not say much, but her body speaks loud and clear.

After a traumatic tour in Afghanistan, Carmina is struggling to regain her speech and rebuild her life. More than anything, she wants to feel like a woman again. Tom may be a wholesome All-American, but he knows just how she needs to be touched—and he’s not the only Rebel who arouses her interest. With his scorching intensity, Tom’s best friend leaves her wondering if two players might be better than one.

Danny Smith is no stranger to his team’s kinky reputation. He gave in to temptation once, but he’s not going down that road again. Sure, Carmina’s curves promise pleasure, but her eyes guarantee it comes with baggage—and Danny has enough of his own. Still, giving up control can feel so good. And when it comes to everything Danny craves, Carmina and Tom make the perfect team.