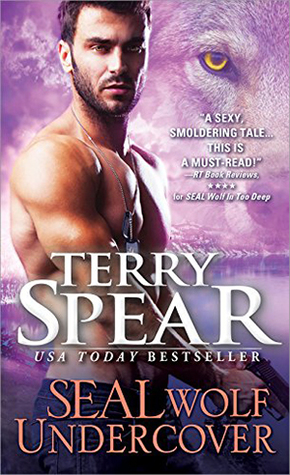 I was very excited when I first learned that Ms. Spear would be intertwining the worlds of her wolf and jaguar shifter stories. Having read so many of both series, combining the two seemed like the perfect next step. And even though there was a good deal that I enjoyed about SEAL Wolf Undercover, I admit that my feelings are somewhat mixed.

On the plus side, many of the more prominent things that appealed in earlier stories—including errable but lovable alpha males falling for tough, capable women—are present in SEAL Wolf Undercover. Jillian is confident, strong, and perfectly able to take care of herself. Vaughn is mostly a loner, a little arrogant, and can’t help but be instantly attracted to Jillian the moment he sees her. The feeling is mutual, though, and the inevitability of the two main characters getting together is something of a hallmark of the companion series.

Additionally, Ms. Spear incorporates familiar characters and a healthy dose of humor into this new world, which is something I’ve always appreciated. Vaughn and Jillian’s introduction isn’t at all how most couples would get their start, but it creates a running gag throughout the story that establishes surprisingly solid footing for the rest of their relationship. Carrying the original groundwork and characters of the “United Shifter Force” into SEAL Wolf Undercover also provided a recognizable foundation on which additional stories might build.

Although SEAL Wolf Undercover is consistent with the others in the series I’ve read, there were a few concerns that made it difficult for me to fully settle into the story. Various technical issues that hadn’t been addressed in the ARC I received for this review were hard to ignore, but will hopefully be resolved in the final version. Repetition of phrasing, occasionally confusing establishment of the chain of events, ambiguity in regards to which character is speaking in some scenes, spontaneous POV shifts, and so forth, all kept the narrative from feeling as solid as some in the past have been.

Though it has a rough patch or two, SEAL Wolf Undercover has many other good things to recommend it. Like the other stories, it includes a mystery to be solved, a whirlwind romance, and a loving forever that fans of the series are sure to enjoy. Regardless, the introduction of the groups of shifters has unlocked an expansive set of new possibilities, and I’m hopeful for the future of the series overall.

Never be so foolish as to fall for the enemy…

Special wolf agent Jillian Matthews has joined the jaguar-run United Shifter Force to track down a deadly criminal. She’s even willing to work with PI Vaughn Greystroke―until the hot, growly SEAL wolf makes the mistake of getting in her way. Naturally, she shoots him. Who could blame her?

Vaughn Greystroke has always worked alone. But when a string of attempted murders puts him in the crosshairs, teaming up with the Shifter Force begins to sound like a good idea. Even if he has to work with alluring―and potentially treacherous―Jillian Matthews. Vaughn is a trained SEAL, after all. He can surely keep his distance from Jillian…no matter how much she’s getting under his skin.