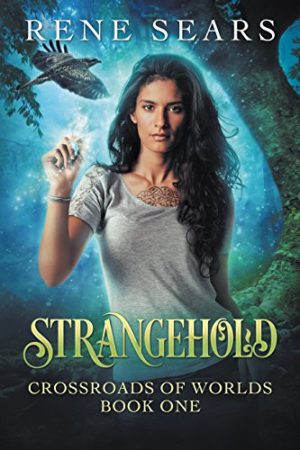 Strangehold is a fascinating series debut.  I enjoyed this introduction to a world of witches and Faerie and look forward to more.

Let me say first that this novella could have been a full novel.  There is such a rich world with fascinating characters and politics, some elements could have been stretched out a bit in the storytelling.  That being said, the story wasn’t lacking despite its shorter length.  In fact, I’d say the book had a succinct feeling – the story flowed and conveyed the twists and turns without a lot of embellishment.  I enjoyed Ms. Sears’s writing style and felt that it was a refreshing narration.

The story is predominately told from Morgan Tenpenny’s point of view.  Morgan is a witch who lives as a guardian of one of the gates between the mortal world and Faerie.  For the last half century, there is a treaty in place between the Fae and the witches – but it seems that someone is trying to destroy that.  Morgan discovers what appears to be a sickness killing witches while investigating why the gates have all been closed; she befriends a cursed fae, Falcon.  As the two team up to stop the sickness and open the gates, we learn much of the world and the politics.

Again, the world is fascinating and I really enjoyed the mythology.  The little bit of romantic plot thread between Falcon and Morgan was an intriguing touch as well.  I look forward to learning more about Falcon, the connection between him and Morgan, and seeing if this romance blossoms (I just love slow burn romances!).  The creation and existence of the Strangehold realm is fascinating as well.  I hope we will see more of it in the future novels.  Though the “evil” is thwarted at the end, there are still some plot lines unresolved.  I eagerly look forward to seeing what happens next for Morgan’s sister, her nieces, and the treaty between mortals and Faerie.

Strangehold is a captivating and straightforward debut novella in the Crossroads of Worlds series.  I liked Morgan’s character and look forward to seeing what happens next for her family and Falcon.  The mythology was intriguing as was the balance of power between witches and Fae.  I eagerly look forward to the next novel in the series.

Morgan Tenpenny has retreated from her painful, magical past, choosing to live quietly as a guardian of one of the gates between worlds. But her sister Gwen is married to a lord of the High Court of Faerie—and when Gwen asks her to protect her nieces, it’s time for Morgan to emerge from her seclusion. The gates to Faerie have inexplicably closed, and no one knows why, not even Falcon, the fae Morgan finds trapped on her side of the gate.

As a devastating illness that only affects magic users starts to sweep through the country, Falcon tells Morgan of a way to reach her nieces in Faerie through a mysterious place called Strangehold—if Morgan can trust that Falcon is all that he seems. But with the Queen of Faerie increasingly defensive of her borders, even their combined powers may not be enough to win them through.

With relations between fae and human falling apart and a deadly illness threatening all of her old colleagues, Morgan finds that her past isn’t as dead as she’d thought. She must navigate the threats in time to save her nieces—and just maybe the world.