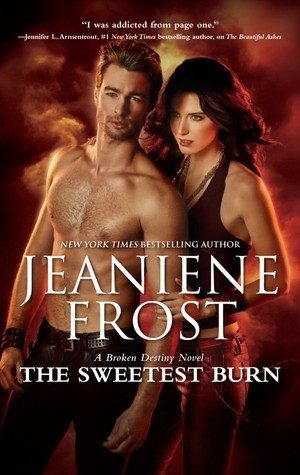 The Sweetest Burn is the long awaited second novel in the Broken Destiny series. Gikany and Una liked this second novel, as Adrian seemed to improve while the plot thickened.  Though Ivy tended to be hot and cold, she preservers through her waffling to the save the day.

It could be that Gikany and Una are just older than the target audience or just more self-secure, but the foibles we perceive in Ivy and Adrian are definitely what we would consider immaturity.  Though Adrian is over a hundred years old, his over protectiveness leads him to make decisions for Ivy and himself without Ivy having a more equal say (or at times any say).  We felt that Adrian reminded us of Edward from the Twilight series, and not necessarily in the good way.  The old-fashioned high handedness is irritating for both Ivy and us.  But in Adrian’s defense, he does try… he truly does but sometimes love leads us down a well-intentioned but dangerously overprotective path.

The quest for the staff was fraught with danger and overshadowed with betrayal.  We were intrigued by the journey that was required.  Through this second novel we learned more about the Archon, Zach.  He is becoming our more favorite secondary character next to Brutus, the gargoyle (whose secret identity is a seagull, trust us, it’s an awesome touch). The rules he follows and the seemingly irritating omissions are actually purposeful and necessary.

We are enjoying this trilogy as it unfolds.  Though we do see some growth in our main characters, they do waffle a bit as it goes (the cha-cha of maturity).  With the foreshadowing of the epilogue, we are intrigued as to what will happen next. Thankfully, the last novel in this trilogy comes out in November. Please stay tuned for our review!

Our Rating:  B Liked it

Conquering a supernatural realm turned out to be easier than getting over a broken heart.  But her initial victory has made Ivy a target for revenge, forcing her to reunite with the dangerous – and dangerously sexy—Adrian.  Ivy isn’t sure which will be harder: finding the hallowed weapon that will repair the crumbling walls between the demon and human realms, or resisting Adrian, who’s decided that come hell or high water, he will make Ivy his.

At first, Adrian tried to resist his feelings for Ivy.  Now, determined to break the curse that dooms their love, he’s vowed to save her and to have her.  If only he can persuade her to forgive his past sins.  But defying destiny – and surrendering to the smoldering desire between them—will bring consequences and sacrifices they never imagined…

Reviews in the Series:
The Beautiful Ashes by Jeaniene Frost (Broken Destiny #1)