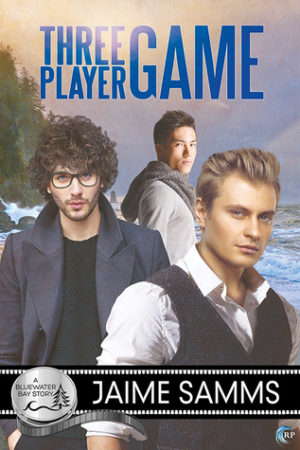 While I generally like the Bluewater Bay series, and even though I found the previous story that revolved around these characters (How the Cookie Crumbles, Bluewater Bay #12) to be sweet as well as charming, I was considerably more conflicted about Three Player Game. As intricately tied to its predecessor as it was, I ended up stopping to do a thorough reread—which I actually enjoyed very much—in order to fill in some blanks that came up early in this story. Despite that necessity, however, this resulted in a more severe comparison between the two, which might have done more harm overall.

Initially, I had a difficult time reconciling the Lee and Vince in Three Player Game with the conniving and “mousy” (respectively) personalities they exhibited in How the Cookie Crumbles. Early in Three Player Game, Vince claims that he’s more than what anyone else believes him to be, but, his saying so wasn’t enough to outweigh my doubts. It took a little while, but those misgivings were ultimately replaced by varying degrees of fondness for all three men, although Pete and Lee were my favorites.

Another problem that I never was able to see past was that both Vince and Pete seemed to view Lee as a target or acquisition—no matter how precious to them he might be. Having said that, the lack of pre-existing definitions, in conjunction with Pete’s raw earnestness, helped make the affection between Pete and Lee feel more honest and easy to me. In contrast, Vince deliberately—though not with any force—overstepped Lee’s boundaries more than once, which kept me from fully accepting their connection as an entirely healthy one. Regardless, the “means to an end” nature of their actions was uncomfortable at times, and affected the entire narrative for me, as a result.

Although I had a difficult time with several elements of Three Player Game, there were quite a few things that I liked, as well. One of the most important, I believe, is that the narrative doesn’t gloss over the complexities a polyamorous relationship likely entails. I felt that, while the issues these characters face are worthy of serious consideration, the author didn’t insinuate that they are applicable to everyone. I also appreciated that, while the three men eventually form a cohesive unit, the individual relationships in play within it are unique and must be treated as such by all involved if they have any hope of succeeding.

I found it similarly promising that Lee, Pete, and Vince each acknowledge their respective weaknesses, without succumbing to them. Outside of the insistent nature of the pursuit itself, all three men also have moments where they are exactly what the other(s) need. There are several very sweet moments—usually involving Pete—that I was able to enjoy quite a bit, as well. Eventually, they all learn to share both the burdens and the pleasures while avoiding losing fundamental pieces of their individual personalities.

Like the other stories in the Bluewater Bay series, Three Player Game can be read as a standalone. And, even though it underscored the discrepancies in some of the characters’ past vs. present selves, I strongly recommend reading How the Cookie Crumbles first, especially since there is so much overlap in characters and backstory. Three Player Game is an ambitious undertaking, and I wasn’t surprised to encounter a few complications as I read. I do feel, however, that the things that discomfited me the most could have been avoided in several cases. Still, details that were irresponsibly overlooked in other stories received a lot of much-needed attention here, and that’s something I’ll remember, too.

Vince’s life has improved immeasurably since he moved to Bluewater Bay two years ago. He’s gone from working for a man he hated, to helping found a company he believes in. And he and his boyfriend, Pete, have built a delicate balance of power between them that keeps them both grounded and thriving.

Pete’s job on the set of Wolf’s Landing is demanding. He needs lots of downtime off set, and that’s where Vince’s firm but gentle control isn’t always enough. And for Vince, Pete’s constant high-energy needs are turning out to be more than he can handle alone.

It’s no surprise to either of them, then, that sparks fly when Vince’s coworker Lee enters the picture. Outwardly, Lee is tough and confident, but when a bad back confines him to Pete and Vince’s spare room, the cracks start to show and his desire for connection begins to peek through.

Pete and Vince both like what they see under Lee’s prickly outside, but now the three men must learn that love isn’t about beating the game—it’s about balance, trust, and letting each other in.