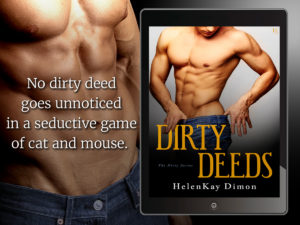 “Alec Drummond.” The name slipped out before Gaige could think to call it back.

At thirty-six Alec had been running the company for years, increasing the value and earnings of the family’s dying business well beyond expectations. Despite the public-relations potential of that sort of press, he refused to be interviewed or photographed. That only drove more interest in his direction.

But there was another side to the success. People talked about his history in hushed whispers. There were rumors of how he killed the competition—literally. But right now, this close, only feet apart, Gaige saw the man not the reputation. His gaze skimmed over every inch of Alec’s hot body. All six feet—damn, was he six-three?—of him.

He was loom-over-you-and-stare-you-down tall. Lean with broad shoulders that slid to a perfect V at his trim waist. His hair straddled the fine line between dark blond and light brown. Those green eyes telegraphed an iciness, an almost soulless detachment from the world around him.

Attractive in a rough-and-earned-it kind of way. Not even a little pretty. Certainly not a guy who gave off an open or inviting vibe. But sexy. Like, he would know what to do with his mouth and hands once he had you up against a wall.

Yeah, Alec Drummond stood there looking exactly as he’d been described by so many sources. Mysterious, lethal, thrumming with heat and rich as hell. From the perfect black suit to the deceptively simple stainless steel watch he wore.

Alec’s gaze never wavered. “If you know who I am I have to wonder why you were reckless enough to break in here.”

“You’re not even holding a gun.” That thought pinged Gaige’s brain and struck him as oddly funny after the earlier threat. He didn’t doubt that behind all the proper breeding and those fancy boarding schools and big boardrooms Alec knew how to win a street fight. Determination practically oozed from him.

“Me being unarmed is why you’re still alive.” Without breaking eye contact, Alec nodded and the two obviously armed men with him stepped forward, headed straight for Gaige. “Search him.”

They closed in, each grabbing an arm. That fast Gaige’s temper spiked and his body pulsed with the need to strike out. But he tamped down on his instinct to slam the men into the racks and take his chances with their boss. He had to ride this out.

They patted him down but Gaige refused to flinch at being shoved around. “I didn’t take anything.”

“We’ll see.” Alec watched the body search. His gaze traveled all over Gaige, following his men’s hands as slipped over Gaige’s torso and down his legs. When they dumped the scrambler and keycard on the shelf next to the laptop, Alec’s intense stare locked on Gaige’s face again. “You were saying?”

“Not stolen. Those things are mine.”

Alec motioned for his men to step back before he started talking again. “You’re very sure of yourself for someone who was just caught attempting to steal data. I wonder if you’re stupid or if you have a death wish.”

“Neither.” Gaige shrugged. “Maybe both.”

With that, the energy in the room shifted. The suffocating tension gave way to different sensation. Gaige couldn’t describe it but it felt oddly like excitement. The thundering sound of his heartbeat stopped echoing through his body. A strange calmness settled over him as his mind began to spin with ways to win a verbal battle against the one and only Alec Drummond.

“You like danger, do you?” Alec’s voice sounded perilously soft as he asked the question.

“I’ve been known to play.” If Alec wanted to spar that worked for Gaige. He liked games. He excelled at them, in fact. Engaging in a battle with someone like Alec proved to be an intoxicating pull.

They could go back and forth, seeing who would blink first. Since he no longer had anything to lose, Gaige battled back his fear and focused on his prey. Poured every ounce of his will into proving to Alec that he was not the only hardass in the room.

First, he wanted to throw Alec off. He didn’t strike Gaige as a man who enjoyed banter, so that’s exactly where he went. “Technically, I was typing not stealing.”

For a second Alec just stood there. His broad chest lifted and fell on heavy breaths. “That’s really your answer?”

“Nothing is going to happen to me.” Gaige had no idea if that was true but there was something truly freeing in grabbing onto the idea and riding it out.

“That’s an interesting take on your current situation.”

“That’s not the word I’d use.” A nerve in Alec’s jaw seemed to twitch and his jaw stayed locked. “See, I think you believe we’ll turn you over to the German police and then you’ll sweet-talk your way out of this somehow.”

He’d never make it that far. Gaige knew that much. The team outside, the one supposedly working with him, would put a bullet in his brain before letting German police or intelligence walk in on this scene. “I can be very charming.”

Alec’s gaze roamed over Gaige’s face. “You think the way you look will get you out of this.”

For a second Gaige’s mind flashed to something other than this situation and the idiot who’d dragged him into it. Flipped back through some of the other rumors he’d heard about Alec being wild in bed. How he liked to take charge and draw out the pleasure.

Alec’s breathing seemed to tick up, lift his chest in a faster rhythm. “Like a man who doesn’t understand what’s happening to him.”

Alec Drummond didn’t make his billions by playing nice—or by playing much at all. When it comes to pleasure, Alec only has time for whatever’s quick and easy, which is exactly what he gets from his company’s hot new computer genius. But Gaige Owens isn’t some pushover. He pushes back, and it’s giving Alec a rush. The question is, could Gaige be the one who’s leaking trade secrets? Just to be safe, Alec keeps him close at hand . . . night and day.

Gaige never thought he’d roll over for a man like Alec again, but who could resist sex this mind-blowing? Then there’s the draw of Alec’s mysterious side: his cutthroat ambition, his covert CIA connections, and the murder in his past. For Gaige, a deeper look proves an irresistible temptation. But when Gaige and Alec are stripped of their defenses by an unseen danger, everything they don’t know could bring them closer together—or tear them apart. Only one thing is certain: Before it’s all over, someone’s going down.

HelenKay Dimon spent the years before becoming a romance author as a divorce attorney—not the usual career transition. Now she writes full-time and she’s much happier. The author of more than thirty novels, novellas, and short stories that have twice been named “Red-Hot Reads” and excerpted in Cosmopolitan, she’s on the board of directors of the Romance Writers of America and teaches fiction writing at UC San Diego and Mira Costa College.