Audiobook Review: Coming in From the Cold 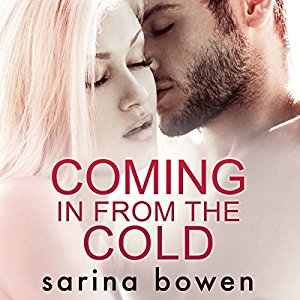 Willow is stuck in a dream life that was never her dream. Following her then boyfriend to raise chickens on a farm in Vermont, Willow was dumped and left in debt when he found a pretty face with a trust fund, moving to California. Trying to get home one night before the blizzard gets any worse, Willow swerves off the road and is left with a sexy stranger.

Dane loves being an Olympic skier, but he’s lonely and hiding a huge secret which keeps him from forming any attachments. Running off the road during a blizzard, Dane finds himself trapped with a beautiful woman who is willing to share one night of passion. But when a freak accident takes him out of competition for the season, he’s forced to face his nightmares head on.

Coming in From the Cold is a cute contemporary romance that makes the hero and heroine work for their HEA. The opening scene, with the pair stuck in a jeep during a blizzard, is a wonderful way for the couple to very quickly get to know one another. They trade complaints while stuck, waiting for the plows. The situation creates a false sense of intimacy, allowing both to share secrets and do things (*cough* jeepsex *cough*) they normally wouldn’t do. One thing leads to another and soon the pair take things further than planned.

Dane has a HUGE chip on his shoulder, which leads to some MAJOR asshat behavior and an unintentional spill on the slopes. Being laid up and unable to compete adds to his destructive mood, and I honestly wasn’t sure he’d be able to redeem himself. But because Willow is a psychology doctoral student, she has insight as to Dane’s behavior. While she’s not ready to jump back into bed with him, she’s able to put the situation into perspective with a bit of emotional detachment, allowing me to travel her journey to forgiveness with her. She’s not unemotional and still hurts, but understands.

The dual POV story has both a male and female narrator for the two POVs. Both narrators are pretty good: not great, but solid. At first, I listened to the book at 1.25x speed, and I did have an issue with Ms. Mitchell at the start. She would end of several sentences and phrases by lengthening the vowels and deepening in tone. However, the issue cleared up when I moved up to 1.5x speed and/or she just improved with time. They both did better jobs performing their own gender voices; however, Ms. Michell’s version of Dane didn’t fit his persona most times. He sounded too “boy next door” or chipper for his surly attitude.

Coming in From the Cold is a delightful romance with a lovely happy ending; however, there are plenty of dark moments along the journey. I like that although there are some familiar storylines, the story is not cliche or overly predictable. Dane is a real jerk, but the HEA works because Willow is a psychologist (in training) and can understand with detachment why Dane reacts as he does.

Alpine ski champion Dane “Danger” Hollister does not do relationships, though he has an excellent reason. No woman would ever say “I do” to a guy whose faulty DNA will eventually cost him everything: his spot on the US Ski team, his endorsements, and the ability to fly downhill at 90mph.

While Willow Reade moved to rural Vermont to get back to the land, that wasn’t meant to include a night stranded in her vehicle during a blizzard. Luckily, the hot ski racer she practically ran off the road has granola bars and a sleeping bag, and is happy to share. Maybe it’s the close quarters, maybe it’s the snow, but soon the two are sharing a lot more than conversation.

Yet neither can guess how their spontaneous passion will uncork Dane’s ugly secret and Willow’s tentative peace with her own choices. Only their mutual trust and bravery can end the pain and give Willow and Dane a shot at hard won happiness.