Audiobook Review: Falling From the Sky 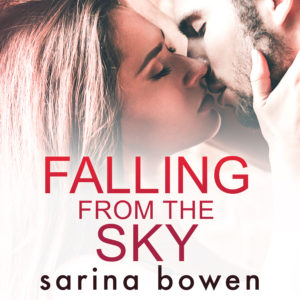 The second story in Ms. Bowen’s Gravity series opens about a year after the conclusion of  Coming in From the Cold, with Dane, Willow and their new baby living out West, thus leaving behind best friend Willow. During one of the couple’s visits back to Vermont to sell Willow’s farm, they introduce Callie to snowboarder Hank, who proceeds to have a career-ending accident on the slopes. Fast forward nine months: Callie is the director of a rehabilitation study at her hospital and Hank is one of its participants. Hank is drawn to Callie and looking to be more than friends, but Callie is ready to start a new life and move to California.

I absolutely adored Callie and Hank’s story. What could have been predictable and ordinary is exciting and romantic. Right from the start, their mutual attraction causes both to toss caution to the wind and give something “more” a try. However, due to certain “issues” Hank experiences, things go south quickly. Luckily both are able to move past their insecurities and fears to open up a genuine dialogue and develop a true friendship.

I like that both the male and female narrators are different in book 2 than in the first title, especially since the story focuses on two new feature characters. I found both narrators to be a bit better suited to the characters and enjoyed them more than the first go around. I noticed I prefered the female narrator at 1.25x and male narrator at 1.5x but kept the playback speed at 1.5x. The male’s voice is deliciously deep with a rich timbre. It’s a great voice for Hank, who is a huge man with intense emotions. Similarly, the female narrator is a good fit for the intelligent, yet worrisome Callie. I did find Ms. Eby’s male voices are a bit on the feminine side, but not bad.

Falling From the Sky is a delightful romance that warmed my heart. Ms. Bowen gives Callie and Hank a HEA without the need to fix all their issues. The story brings humor and heart, taking me on an emotional journey from highs to lows.

She’s the woman he doesn’t remember. He’s the man she can’t forget.

Bad boy Hank “Hazardous” Lazarus used to have everything: a gorgeous girlfriend, a career as a freestyle snowboarder and a spot on the US Olympic team. Nine months ago, after a bad crash in the half pipe, he woke up in the hospital, unable to move his legs. Now he’s landed there again, but gravity is not the culprit. With his family pressuring him to try a groundbreaking treatment, Hank self-medicates with too much tequila instead.

Doctor Callie Anders has the courage to restart a patient’s heart with a thousand volts of electricity, yet she’s afraid to risk her own. So she doesn’t confess to her newest patient they they met just before the accident, an encounter that he doesn’t remember. Even as their friendship develops, she won’t admit that she regrets turning down his dinner invitation, or that her heart stutters every time those inked shoulders roll through the door of the therapy department.

With another Vermont winter coming again, Hank needs a hand out from under the avalanche of his disappointments. If only Callie were brave enough to take the job.