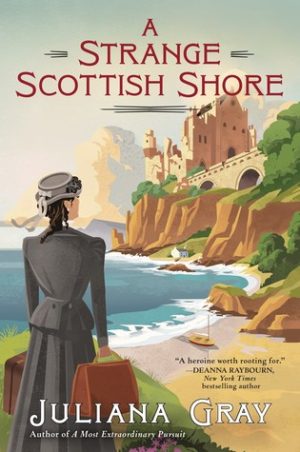 First, I apologize that this review is not very long; there are just too many places where a spoiler could be dropped and there is nothing worse than a spoiler when it comes to a mystery novel.

I am not as a rule a mystery reader. I don’t like trying to guess what will happen or has happened to get us to where we are. I also don’t like to be left hanging as happens all too often in mystery novels. That being said I am a Juliana Gray fan and I enjoyed, her previous offering, A Most Extraordinary Pursuit, so I was really looking forward to A Strange Scottish Shore. However, after having finished it, I can’t say I loved it as much as I did A Most Extraordinary Pursuit. I enjoyed the characters and setting and will admit Ms. gray continues to weave a good story, but there were details like the time traveling that I found to be discombobulating and confusing. I understand there is an element of mystery and magic to time travel but I don’t feel like the rules were clearly explained, and so I spent more time than I would have liked trying to figure out how people got where they were and how they might get back, which kept me from enjoying the story as much as I wanted to.

That being said, when I wasn’t distracted by random questions and rules I did enjoy the settings, the escape to another time period, and getting to know new and very interesting characters. Ms. Gray took me to a part of history that I was not even remotely familiar with and did such a good job with it that i actually took time after finishing the book to look up more information on the time period and its people. She also kept me engaged despite the distractions. The bad guy continues to be really bad, while Truelove and Silverton continue to make a fantastic pair. They are funny and engaging and balance one another beautifully. The secondary characters add flavor and insight to Truelove and Silverton’s story, something I always enjoy. The idea of how legend continues to have an effect on people generations upon generations after it is told was also a fun theme to explore.

Overall, A Strange Scottish Shore was an interesting break from my usual reads. Hopefully Ms. Gray will better explain or fix the few issues I had with the rules in her next novel because I’m not ready to say goodbye to Truelove and Silverton just yet.

Scotland, 1906. A mysterious object discovered inside an ancient castle calls Maximilian Haywood, the new Duke of Olympia, and his fellow researcher Emmeline Truelove, north to the remote Orkney Islands. No stranger to the study of anachronisms in archeological digs, Haywood is nevertheless puzzled by the artifact: a suit of clothing, which, according to family legend, once belonged to a selkie who rose from the sea in ancient times and married the castle’s first laird.

But Haywood and Truelove soon discover they’re not the only ones interested in the selkie’s strange hide, and when their mutual friend Lord Silverton vanishes in the night from an Edinburgh street, the mystery takes a dangerous turn through time, which only Haywood’s skills and Truelove’s bravery can solve…