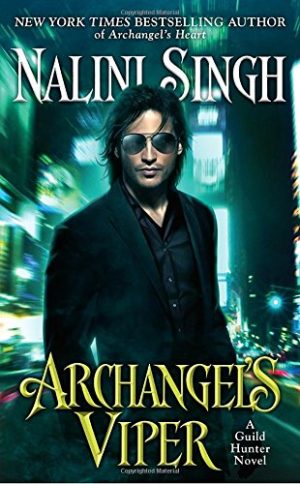 Holly, a series’ fringe character who was brutally terrorized by the archangel Uram back in the beginning of the series, was left for nearly dead and Made into something not quite right. She now serves Raphael’s Tower under the close supervision of Dmitri and the Seven. However, after a kidnapping attempt, the gang discovers there is a bounty on Holly. With Viper back in town, it’s up to him to keep her safe. Figuring out who is after Holly and what she’s becoming are the focus of Archangel’s Viper.

The story takes place concurrent in time to the previous book, Archangel’s Heart, while Raphael and Elena are far from Manhattan. Dmitri is left in charge, and with the support of Illium and Viper, they keep the territory safe while their sire is away. This allows room for Holly to explore her otherness and the changes happening under her skin without fear that Raphael will end it prematurely.

With so much of the book’s plotlines focused on Holly, Archangel’s Viper isn’t really Viper’s story. This one belongs to her. Nearly broken after her capture by Uram, she’s evolving into something other, and Viper is the one person who can relate. During the story they bond – deepening a friendship born out of respect and understanding. They also explore their sexual chemistry, but this is secondary to Holly’s coming-of-age tale. I enjoyed watching Viper and Holly piece together what has happened to and what is becoming of Holly. However, I was a little bit frustrated with the kidnapping storyline, because it dropped off, taking a backseat to her evolution, shortly after it began.

While I still classify Archangel’s Viper a paranormal romance, the romance piece is very slow-burning and not the primary focus of the book. Yet, it doesn’t matter to me because I enjoyed the interactions between Viper and Holly, regardless of how mild or flirty. These are two characters we know little about, so watching them develop before my eyes and learn so much more about both was entertaining.

All in all, Archangel’s Viper is another exciting, engrossing story in one of my favorite series. Ms. Singh gets an A+ for her world-building and character development, with each book in the Guild Hunter series adding so much to the overall picture. I look forward to each installment and cannot wait to see what she cooks up next!

Once a broken girl known as Sorrow, Holly Chang now prowls the shadowy gray underground of the city for the angels. But it’s not her winged allies who make her a wanted woman—it’s the unknown power coursing through her veins. Brutalized by an insane archangel, she was left with the bloodlust of a vampire, the ability to mesmerize her prey, and a poisonous bite.

Now, someone has put a bounty on her head…

Venom is one of the Seven, Archangel Raphael’s private guard, and he’s as infuriating as he is seductive. A centuries-old vampire, his fangs dispense a poison deadlier than Holly’s. But even if Venom can protect Holly from those hunting her, he might not be able to save himself—because the strange, violent power inside Holly is awakening…

No one is safe.