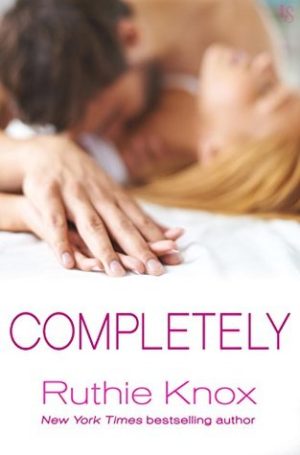 Like the rest of Knox’s New York Trilogy, Completely doesn’t fall into a tidy classification.  More than the others, however, it wants to tip over into the dreaded women’s fiction category. I think Knox has earned it this time, and I didn’t like it as much as the two (three) previous books being Truly, Madly, and the related About Last Night.

About Last Night is probably my favorite book Knox has written so it pleases me that she’s chosen to return to the Chamberlain family with the New York Trilogy and not with the focus on characters one might expect.  Many authors just run through the siblings of a family in a series whereas Knox gives more emphasis to their love stories through the women in their lives.  In Completely, Knox focuses on Rosemary Chamberlain, Winston Chamberlain’s (Madly) ex-wife.  Winston is the older brother of Neville in About Last Night.

Rosemary led a tidy, scheduled, polite existence as Winston’s wife, but that’s all she was doing, existing.  She describes herself as “wallpaper.”  Not to put too fine a point on it, but in Completely she struggles to find herself and stumbles upon love in the process.  Unfortunately, it is not as compelling of a read as Knox’s previous books because it starts with a character who is neither likable nor unlikable.  Through shared tragedy she falls in love with a man who works very hard at being desperately private.  As a result, there’s not much for the reader to relate to in either character. I found it difficult to invest myself.  Like its predecessor Madly, the characters don’t seem to go together, maybe even less so.  With a spread of seven years between them, not as many as between Winston and Allie, Rosemary is the older of the two.  No one would mistake her for a cougar.  Rather, she’s a proper, British, would-be baroness. Kalden Beckett, her love interest, describes himself as “brown.”  It’s meant as a skin color reference having a Tibetan mother and an American father, being born in New York, but spending a lot of time in Nepal as well.  Like Rosemary’s wallpaper label, it seems more designed to make him blend in with his surroundings, which in his case is dirt and trees. Getting to know them both literally takes the entire book.

One of my favorite characters is peripheral, like Allie’s father Bill was in Madly.  Kal’s mother Yangchen is loosely based on Lhakpa Sherpa, the world record holding climber who has summitted Mount Everest eight times.

Knox has written Yangchen as the type of woman who with different circumstances would have been the CEO of a major corporation.  Instead she runs multiple family businesses and the lives of her family.  Personally, I like her better this way.  It makes her much more interesting. Probably not unlike a CEO, the time spent keeping so many balls in the air makes it difficult to have close relationships.  It would be easy to say her relationships were distant, but Kal showcases Knox’s craftsmanship with words as he describes his relationship with his mother, “He doubted she’d be worried.  They were like house cats most of the time.  They did their own thing, left the occasional dead bird of love on each other’s doormats.”

Unlike her previous books, Completely lacks the big twist at the end, but Knox does not leave us hanging.  The story does come to a satisfactory ending and includes a cute epilogue. Knox continues to be a go-to author for me and even though this is my not favorite offering, I appreciate her writing style and will definitely read what comes next!

Beneath her whole “classic English beauty” appearance is an indomitable spirit that has turned Rosemary Chamberlain into something of a celebrity mountain climber. But after an Everest excursion takes a deadly turn, Rosemary is rescued by her quick-thinking guide, New York native Kal Beckett. Rosemary’s brush with death brings out a primal need to celebrate life—and inspires a night of steamy sex with the rather gorgeous man who saved her.

The son of a famous female climber with a scandalous past, Kal Beckett is still trying to find himself. In the Zen state of mind where Kal spends most of his time, anything can happen—like making love to a fascinating stranger and setting off across the world with her the next morning. But as their lives collide in the whirlwind of passion that is New York City, the real adventure is clearly just beginning. . . .