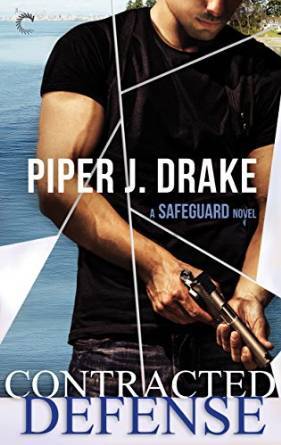 Contracted Defense is the third title in the Safeguard series and was a gripping blend of humor and action.  Gikany and Una continue to like this suspenseful romantic series, even though the romance moves a little quickly for our tastes.

One of the elements that we like about this series is that even though the main couple may fall in love quickly, it still ends with the Happily-For-Now, allowing the couple time to date as the next novel begins.  We like that for all the drama and intense passion, they still will take their time not jumping into the forever after.

Adam and Victoria’s introduction was as awkward as it was funny.  Although Adam is deeply attracted to Victoria, Gikany and Una enjoyed how Victoria attempted to distance herself and act professional.  Their frankness as they sorted their attraction to each other while working together was mature and a welcome realistic foundation to a burgeoning relationship.  We enjoyed the contrast of Adam’s more flexible and laid-back attitude to Victoria’s more reserved “type ‘A’ personality.” It was fascinating watching them learn to work with each other and while learning from each other.  Though they fell in love quickly it was not thoughtless nor without seriousness of commitment.

The continuing overarching plot of establishing Safeguard and struggling against Edict, an unscrupulous competing firm, is gripping.  We look forward to learning more about the seeming bias that Edict has against Safeguard.  There must be more going on in that organization and with the relationship they seem to have with Phoenix Biotech.

Adam and Victoria’s story was suspenseful and passionate.  Although their relationship moved awfully quickly, we enjoyed the open communication between them along with their willingness to learn and grow. Though Edict was thwarted again, we look to learning more about the animosity between the firms.  If you enjoy a militaristic suspense romance, you should give the Safeguard series a try.

Time is running out and the enemy is at the gate.

Adam Hicks may be the rookie at Safeguard, but he’s no novice in the field. Retired from active duty after multiple tours and back fresh from a brief rest in New Zealand, he’s itching to return to action. But the challenge he hoped for arrives in an unexpected form: his sexy yet stern new partner.

The last thing Victoria Ash wants is to work with the new guy—especially one as gorgeous as Adam. His relaxed attitude about their first “easy” assignment together—setting up a private home defense network for a reclusive client—doesn’t impress her. Easy usually means trouble. She’s proved right when Adam discovers that the multiple incursions on the physical and cyber security systems aren’t just glitches. They’re under attack…and there’s a traitor in their midst.

As tension mounts, so does the attraction between Victoria and Adam. They must protect their client and the research he’s desperately trying to keep secret. Working together, they have to find the mole before their defense measures, in the fortress and online, are compromised and the deadly secrets they’ve sworn to protect are revealed.