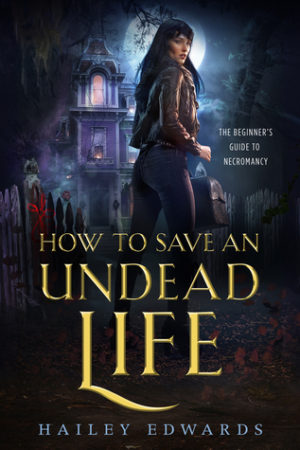 How to Save an Undead Life
Author: Hailey Edwards
Reviewer: VampBard
Rating: A

Hailey Edwards has a new series out!!! **muppet flail happy dance** I’ve been chomping at the bit to get my grubby little hands on How to Save an Undead Life since Ms. Edwards announced the project and started dropping hints. This is the first of three (currently) planned titles in the Beginner’s Guide to Necromancy series, and I’m already all grabby hands for book two. We’ve got some awesome vampire lore here, and the world is well-developed so it’s easy to see the hierarchy.

First, supporting characters. Boaz: this guy is Grier’s bestie’s big bro and her long-time crush—I definitely see something happening here down the road, in the series arc.  Woolly: the house, you guys…I love its personality and I think it plays a pretty significant role as Grier’s safety net. Amelie: Grier’s bestie and Boaz’s sister who lives next door with her parents. Neely: Grier’s personal designer (i.e., he does her hair and makeup for work and personal stuff when she needs a spectacular look) has a purpose (beyond the obvious) I haven’t quite figured out yet. Volkov: this dude? I’m pretty sure we’ll see more of him. Linus: dude makes me antsy.

I really love Grier. The way her character was fleshed out in this first book of the series was engaging and I was able to connect with her immediately. This is a first person POV—which I sometimes have trouble reading/getting into—and I think this deep, personal POV was really effective for the story. This girl has every reason to be sitting under her kitchen table, rocking back and forth, having the BIGGEST pity party for herself, but she has that kick-ass-and-take-names attitude I admire in so many of Ms. Edwards’ characters. She’s not a wilting damsel in distress waiting for her hero to rescue her—except in dire situations. Grier has managed to win me over in book one of the series because she’s a problem-solver. While she was locked up for five years in paranormal prison, she’s been exonerated and has returned to her old life. Sort of—you’ll find out when you read it. I’m super stoked to learn more about the supporting characters and see where Ms. Edwards takes us on Grier’s journey in the Beginner’s Guide to Necromancy series.

Grier Woolworth spends her nights weaving spooky tales of lost souls and tragedies for tourists on the streets of downtown Savannah. Hoop skirt and parasol aside, it’s not a bad gig. The pay is crap, but the tips keep the lights on in her personal haunted mansion and her pantry stocked with ramen.

Life is about as normal as it gets for an ex-necromancer hiding among humans. Until the society that excommunicated Grier offers her a second chance at being more than ordinary. Too bad no one warned her the trouble with being extraordinary is it can get you killed.