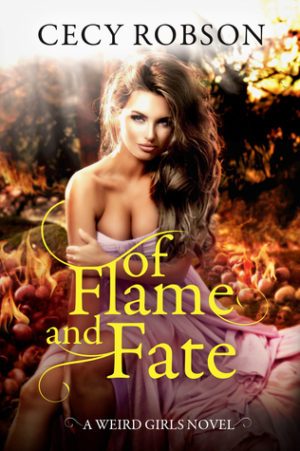 Of Flame and Fate
Author: Cecy Robson
Reviewer: Gikany and Una
Rating: B-

Of Flame and Fate is the second spin-off novel from the Weird Girls series focusing on Taran (nicknamed the Flame series).  Although the overall plot of this book was intriguing, there was just a little too much angst for our enjoyment.

Some angst is normal in this series.  The girls seem to continually need to prove themselves, not just to the supernatural community, but also to themselves.  The continuing power struggles between Taran and Gem just added to the melodrama.  Although they did make up in the last novel, they are still not 100% through their issues.  One could say they begrudgingly worked well together in this book, if struggling, growling, and arguing are normal in every couple’s interactions.  It would be awesome to see them actually honestly communicate with each other.  Gem is good at it, but Taran really needs to open up honestly with Gem.

There were other angst-ridden plot lines in this novel.  One of which is the battle over the fate of Johnny Fate.  Although it was a little predictable how things with Johnny would go, we were still surprised by the ending.  We have no idea what is next, but we can’t wait to see Taran get even.  Destiny has always been a fun character and it was difficult to watch her slow demise.  The anguish of Tye was heart wrenching and painful to experience.

It also seems that poor Emme continues to have her heart in a blender.  We hope that Emme will eventually not only find someone who will love and support her, but that she will have a book that is told from her point of view.  After having Bren’s point of view in a previous novella, it is strange to see how he is treating Emme now.  We hope Bren figures himself out or that his wolf and his human side reach an agreement and make the right choice.

Although overly angst-riddled, we still liked this latest Weird Girls adventure, focusing on Taran.  With the cliffhanger ending, we wonder what will happen next.  Hopefully Taran and Gem will have an honest discussion and Destiny’s predictions for the children come true.  We know for sure, we are waiting for the next Weird Girls story.

Taran Wird, who commands the power to wield fire and lightning, is an oddity in the supernatural world. But neither Taran nor her unique sisters compare to the bizarre entity known as Destiny. And Taran is assigned to protect her.

Born of two witches, Destiny is revered among the supernatural elite for her acute ability to predict the future. Her biggest prophecy involves Taran’s sister, Celia, whom Destiny decreed will bear children strong enough to take on the evil that’s rising. Yet Destiny is not alone in her predictions, or individuality.

When Johnny Fate, a rock star among humans and a male version of Destiny is discovered, his powers and Destiny’s clash, triggering the start of Destiny’s demise and altering the fate of Celia’s unborn children.

Taran, her werewolf lover Gemini, and their allies must determine if it’s Fate who will decide what will become of Celia’s children, or if their lives and the world will perish with Destiny.