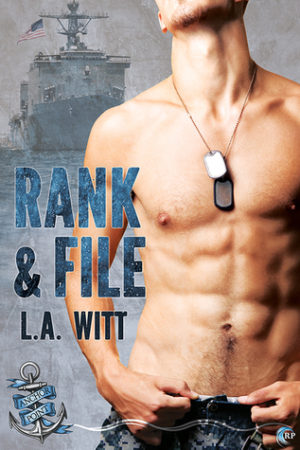 Although he’s never sure what kind of challenges each day will bring on NAS Adams, Senior Chief Will Curtis has always loved his career in the Navy. And, despite the toll it’s taken on his personal life, he can’t imagine doing anything else. Even so, a one-time only, forbidden hookup with a sexy younger officer might be exactly what he needs to get over his lying, cheating ex. It would have been perfect, if once had been enough.

Having been surrounded by his family’s military heritage his entire life, Lieutenant Brent Jameson always assumed he’d spend the rest of his days continuing the tradition. Following any other path was, literally, unthinkable. But, choosing between a future he doesn’t believe in and the “unduly familiar” relationship that makes him happy won’t be easy—and it’s bound to hurt either way.

While I’ve generally liked the other stories I’ve read in the Anchor Point series, Rank & File is my favorite yet. PTSD and alcoholism are extremely important issues, and I think the author has always dealt with them well. But, Will and Brent’s struggle to find happiness was more external and possibility-oriented, and I became increasingly invested in the outcome as the narrative progressed.

Rank & File is also one of the steamier novels in the series. Brent and Will’s relationship begins with a very naughty hookup in a public place, and it’s indisputably clear that they’re both getting exactly what they want. The frequency with which their encounters continue could have strained the other aspects of the story if it was the only indication of their compatibility, but it’s not. On the contrary, sex between Will and Brent has another welcome purpose: it opens the door to the kind of intimacy they both crave, but would never explore otherwise.

Another refreshing thing about Rank & File is that it handily dodges the “anything for love” trope that would likely have diluted the internal conflicts both men deal with throughout the story. The unfairness of the policy that is technically causing Will and Brent problems on the surface is certainly noted, but the narrative wisely doesn’t rely on it as a scapegoat. Each must make a difficult choice based on certain things they can’t change, even if an intersection of those paths in the future isn’t guaranteed.

Rank & File is absolutely among my favorite of the Anchor Point stories yet. Will and Brent aren’t so much fighting their own demons as they are trying to figure out or accept who they are. Though there are tough moments throughout the book, there is also a pleasantly well-balanced amount of laughter and sweetness that softened the edges without sacrificing the point of the narrative. The chemistry between them was sort of just icing for me after all that. Overall, I liked Brent and Will a great deal, and, with several more titles left to go in the series, I’d really enjoy seeing them again down the line.

Senior Chief Will Curtis is as straitlaced as they come. While his fellow Sailors have partied their way through their enlistments, he’s had his eye on the prize—making master chief and retiring after thirty years of service.

Lieutenant Brent Jameson is a Navy brat turned Annapolis grad. He’s lived and breathed the military his whole life, and he knows he’s destined for great things—once he’s done paying his dues at the bottom of the ladder.

When their paths cross, both men know better than to give in to temptation, but that doesn’t stop them. It also doesn’t keep them from coming back for more, even though being discovered would sink their careers. Something has to give—Will can retire, Brent can resign, or they’ll both face court-martial.

But there’s also the option neither wants to acknowledge: jump ship and walk away from each other instead of ending their careers over a fledgling relationship. And they should probably decide before they fall in love.