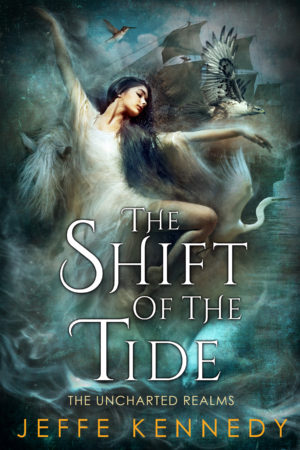 The Shift of the Tide
Author: Jeffe Kennedy
Reviewer: Gikany and Una
Rating: A

Gikany and Una were anxiously awaiting Zynda’s story.  The Shift of the Tide is utterly compelling and may have replaced Andi’s (The Mark of the Tala) as our favorite book in this series.

Zynda has always been a bit of an enigma character.  She is beautifully mysterious and you just know there is much more going on in her head than she lets on.  Zynda is an amazing shapeshifter — the pride of her people, and she is a relative to the previous Tala Queen, Salena. Regardless, Zynda has a secret mission to save her people. This mission will require her to sacrifice her life as she knows it – to give up everything.  Zynda is prepared to make that sacrifice – she has prepared herself for most of her life.  However, her focus and dedication take a severe hit when Marskal is assigned as her watcher.

Marskal is a fascinating character.  We absolutely loved his charm, patience, and wit.  Though charged with protecting Zynda, he never underestimates her.  We loved the give and take that Marskal abides with Zynda.  As Zynda never noticed him prior, he was (or has) been a part of the series since the beginning.  We loved their banter and especially the time spent with Marskal’s family.  He is a truly remarkable and endearing character.  Zynda was not the only one falling for him.

The journey that Marskal and Zynda embark on is more than physical – more than her mission.  Zynda’s journey is not only external but internal.  The closer she comes to her goal, the more torn up inside she becomes – the more she questions the sacrifice required.  We loved how these two conflicts wove together becoming almost a single conflict.  It was utterly gripping and pathos riddled full of heartwarming moments.

Though this novel is transitional in the battle against the Deyrr, it was still gripping as other issues in the realm are explored.  We loved the journey of Zynda and the heart wrenchingly romantic tale between her and Marskal.  We continue to enjoy this world and eagerly look forward to the next story in it.

Our Rating: A, Loved It

Released from the grip of a tyrant, the Twelve Kingdoms have thrown all that touch them into chaos. As the borders open, new enemies emerge to vie for their hard-won power—and old deceptions crumble under the strain…

The most talented shapeshifter of her generation, Zynda has one love in her life: freedom. The open air above her, the water before her, the sun on her skin or wings or fur—their sensual glories more than make up for her loneliness. She serves the High Queen’s company well, but she can’t trust her allies with her secrets, or the secrets of her people. Best that she should keep her distance, alone.

Except wherever she escapes, Marskal, the Queen’s quiet lieutenant, seems to find her. Solid, stubborn, and disciplined, he’s no more fluid than rock. Yet he knows what she likes, what thrills and unnerves her, when she’s hiding something. His lithe warrior’s body promises pleasure she has gone too long without. But no matter how careful, how tender, how incendiary he is, only Zynda can know the sacrifice she must make for her people’s future—and the time is drawing near…