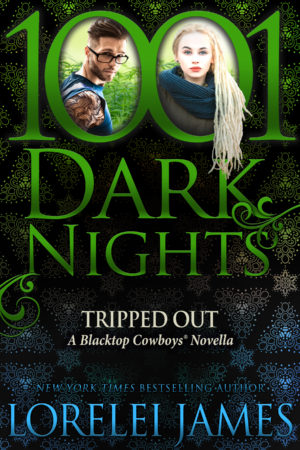 After leaving her well-paying corporate job, Stirling Gradsky took a chance and went into business with her brother. Now they own and operate High Society, a medicinal and recreational marijuana facility.

Liam Argent has dedicated his life to understanding the chemical properties of marijuana and loves all the perks of working for High Society. But the constant head-butting and pranking with Stirling needs to end so they can grow the company.

While I have enjoyed the other 1,001 Dark Night / Blacktop Cowboy stories, I felt Tripped Out was not on par with its predecessors. First, I felt like I was dropped into the story with no idea what’s going on. It’s written as if I know these characters, but I don’t remember them at all, even though Stirling is sister to London, the heroine in the first novella, and we meet Stirling and Liam in the third book. I felt like I started off kilter and I never found a good balance.

It is evident that the author did her homework with respect to the subject matter, and I found the information on the emerging medicinal and recreational marijuana markets interesting. However, I felt that there was way too much information about marijuana use and production, making it feel like a technical report, rather than developing the characters and focusing on the romance.

This leads to another issue I had with the story. The characters are big proponents of the use of marijuana, but at times, I felt that they were lecturing me, the reader, taking a holier-than-thou attitude. The two main characters have huge chips on their shoulders and their attitudes are almost condescending. Yet, then the author uses ridiculous stoner stereotypes and actions. And the way they use marijuana to “take the edge off”… needing it at the end (or even during) a stressful day, is reminiscent of an alcoholic needing a drink.

As I stated, I don’t feel the author put enough into the development of the characters. While there are some funny moments and sexy situations, overall I found myself annoyed with Liam and Stirling. Their bantering, even when for fun, grated on me most times. Unfortunately, I never felt a strong romantic connection between the pair, making the story okay, but not one I’d read again.

My Rating: C- Finished It – Liked a little, didn’t like a lot

Stirling Gradsky abandoned the corporate rat race for a more laidback lifestyle. So it’s ironic she’s partnered with a hard-bodied, know-it-all scientist who treats her like a stoner instead of a stone cold business woman capable of running a large scale marijuana farm. Dr. Hot and Tattooed with the big…brain needs to stop sampling their product; he’s under the half-baked idea that he’s the boss.

Dr. Liam Argent’s doctorate isn’t in chemistry, but from the moment he meets his sexy new coworker, there’s enough heat between them to short out all the grow lights in the greenhouse. First item on his agenda? Clearing up the sassy, blunt blonde’s hazy notion that she’s in charge.

Sparks fly as their attraction blazes. But can they weed out their differences without getting burned?