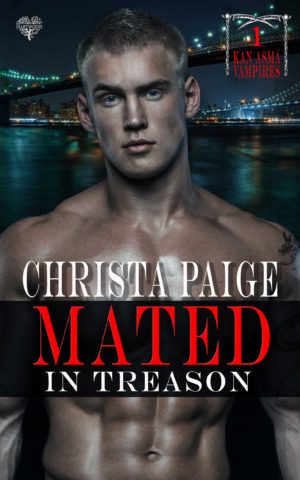 The door swung open and he stood in the threshold. Strong and intense, her essence called to him on an elemental level. “Nadia.” His voice gruff, he said her name on a mere growl around long fangs that pricked his lower lip.

Surprise lined her forehead, her eyes narrowed, and breath wrenched from her chest. She stood from her chair and swiped the back of her hand across her cheek. Red tinged her eyes. Moisture tracked from the corners and spilled down her cheeks. Misery hit him square in the chest like a dull, rusty blade. Needing privacy, he shut the door and locked the deadbolt. “Why are you crying?”

She shook her head. The long length of her ponytail fell over her shoulder as she glanced away from him. Her eyes lost focus and she stared at the dingy wooden cabinets hanging from the far wall.

“Tell me, kjaere.” Gunnar pressed his lips together. Great, now he was using terms of endearment in his mother’s native tongue. He really had lost his frickin’ mind.

Crossing her arms, she shivered as if cold but the temperature in the room was tepid and controlled. “Nadia, let me help.”

With a loud exhalation, she threw her arms up in apparent frustration. Then, she propped her hands on her hips and paced the short length of the room. “You can’t.” She swiped away another tear. “No one can.”

“Did Izak do this?” he spat, needing to understand. God please don’t let it be about that sentinel playboy. “Or Andros?” Either way he had to be prepared for her reply.

“He told me I could have something impossible. Something I want so much.”

Gunnar steeled his composure, flexing his muscles and gritting his jaw. “Who,” he prompted. Inside he quaked with possessiveness and aggression. Get a grip on yourself, idiot.

A short nervous exhalation followed as she turned and faced him. “Andros.”

One step brought him closer, just to the edge of the oblong table sitting in the middle of the room. He leaned into his palm, the cool wood of the table helped to keep him from losing his temper right there. “What did he say, Nadia? Tell me. Maybe I can make it happen.”

She shook her head again and the tip of her tongue slid out, moistening her lips in a long sweep. The tips of her blunt, white teeth chewed on the corner of her mouth. She turned those soulful eyes on him. “I want—” Her breath faltered and her chest rose with a tense inhalation. Twisting the hem of her shirt in her fingers, she focused on the wall behind him, breaking off their connection.

Time stilled as her lips parted and closed again. She sucked her bottom lip between her teeth. “You.” She pushed into his mind, and he could feel her apprehension, fear, and overwhelming need.

He closed the distance between them, grabbed her face with both his hands, ignoring the metal on his arm. Sliding his fingers along her jaw, he cupped the nape of her neck and pulled her forward. He bent his head, stopped fighting against everything he knew he wasn’t supposed to do, and gave into everything he wanted. 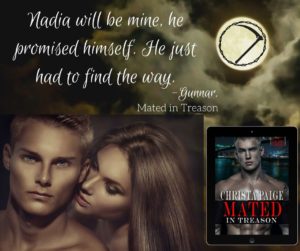 When the kraliyet bodyguard ended up in her hospital bed after an explosion left him in critical condition, Nadia tried to warn herself not to fall in love with him. After all, she’s no vampire Cinderella, and happily-ever-afters didn’t happen to low-born females of the Kan Asma. But her heart wouldn’t listen, and soon she wanted to claim Gunnar as her forever mate, even if it meant taking him the only way possible, as a husband in a disgraceful human ceremony.

Gunnar fell in love with his nurse the moment he saw her smile. He yearned to claim her as his, but the Council would never allow him to mingle his powerful blood with a female from a poor family. The penalty for an unsanctioned mating is a death sentence. He doesn’t care about the threats and possible consequences of making her his. Though, due to the high probability of genetic incompatibility, he can’t complete their blood-bond without knowing if it might take her life. Losing her would be worse than torture.

Their only hope lies with the treasonous Faction hell-bent on destroying the very people Gunnar calls family. Determined to find a way to be mated, Gunnar seeks out the leader of this hidden uprising. Together, Nadia and Gunnar must break every law and rite of their vampire culture to become bonded for life. Gunnar will play a deadly game of subversion or pay a blood price that would sever him from their people and put a bounty on his head. They must survive a dangerous infiltration of the Faction, because they’ll do anything to be together, even if it means being mated in treason.