Audiobook Review: A Plague of Giants 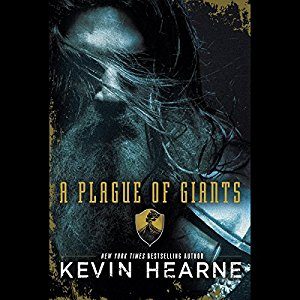 A Plague of Giants is the first book in a new fantasy series from one of my favorite authors, Kevin Hearne (Iron Druid Chronicles). Set in a world where certain members of the population are blessed with Kennings – the ability to manipulate one of the four elements, plants, or animals – although no one has discovered the sixth Kenning (animal control) yet. The six nations of the known world coexist in a tenuous peace; however, that all changes the day that the mysterious Bone Giants attack several cities along the coast. Coming from an unknown land, these warriors dressed in bones, speaking an unknown language, cut down all that stand in their path.

A Plague of Giants is the first part of an epic tale. Similar to the first book in the Lord of the Rings Trilogy, the book shares the journeys and battles of the land and its people, ending not at the conclusion, yet not on a cliffhanger, but rather, at a point of rest in between the parts of the whole. This story is shared in two ways within each chapter, both in present day and in flashbacks that cover the past year or so.

First, the story is narrated in present day by Dervan, a scholar and historian, friend of the ruling king, and survivor of the Bone Giant attack. Willing to help his country as asked, he gets wrapped up in potential espionage and political maneuvering. From his point of view, readers are able to experience how the war has impacted the various classes of people. Additionally, he gives the story a personal connection – a way to internalize the massive events unfolding before our eyes.

Dervan’s primary job by order of Pelenaut Röllend (king) is to accompany Fintan, the Raelech bard, each day and record the knowledge and the tales Fintan shares with the masses on Survivor Field. A Raelech bard has perfect memory recall and the ability to transform shape into the character who’s story he shares. The pelenaut believes Fintan to be a spy of the Triune Council, and wants the details of his day observed.

This leads to the second method of storytelling, which is the bard’s recounting of the events of the Giants’ War. By taking on the personas of key figures of the war and sharing their stories, readers slowly learn about how the lands arrived in their current state. But Fintan is not only sharing this story with the reader, but with the masses of refugees, who have little knowledge of the bigger picture and totality of the war. There are a number of characters, and at first it is difficult to see any connections. However, the larger picture becomes clearer as the tales go on, eventually leading to a full view of the multi-front war with two sets of giants.

It was difficult to follow along at first. Mr. Hearne just tosses the reader into his tale without any guides. Once I got used to the method of storytelling – the back and forth between the past and present – I was able to just listen and absorb. The story on whole is engrossing, made more so by the amazing narration. And although the ending is a bit abrupt (see reference to LotR above), it didn’t detract from my enjoyment. This book is meant to be experienced, and I think I would have struggled reading it rather than listening to it. I had to get out of my usual mindset of taking detailed notes and trying to figure it all out, and rather just absorb and experience the massive tale.

The performances of Luke Daniels and Xe Sands are phenomenal! Most of the narrative is read by Mr. Daniels. He is the primary voices of Dervan and Fintan and all male flashback/memories. Ms. Sands jumps in to share the bard’s female-centric stories, and carries forward her performance to include the bard and Dervan once the flashback concludes. Both provide a massive array of accents and tones, ranging heavy and deep (Gorin Mogen, Hearthfire of Harthrad), to airy and light (Nel Kit Ben Sah, Fornish greensleeve). Both provide such a variety of inflections, emotions; their ranges wow’d me. It was so easy to get lost in their storytelling, enabling me to sit back and enjoy this story.

In the end, I enjoyed my time spend with Dervan, Fintan, and this fascinating new world of the Seven Kennings. While I may have struggled at times to keep up with the massiveness of the tale, once I was able to just let go and listen, I found myself deeply engrossed in the stories and characters. I look forward to finding out what happens next for the citizens of these lands.

Tallynd is a soldier who has already survived her toughest battle: losing her husband. But now she finds herself on the front lines of an invasion of giants, intent on wiping out the entire kingdom, including Tallynd’s two sons—all that she has left. The stakes have never been higher. If Tallynd fails, her boys may never become men.

Dervan is an historian who longs for a simple, quiet life. But he’s drawn into intrigue when he’s hired to record the tales of a mysterious bard who may be a spy or even an assassin for a rival kingdom. As the bard shares his fantastical stories, Dervan makes a shocking discovery: He may have a connection to the tales, one that will bring his own secrets to light.

Abhi’s family have always been hunters, but Abhi wants to choose a different life for himself. Embarking on a journey of self-discovery, Abhi soon learns that his destiny is far greater than he imagined: a powerful new magic thrust upon him may hold the key to defeating the giants once and for all—if it doesn’t destroy him first.

Set in a magical world of terror and wonder, this novel is a deeply felt epic of courage and war, in which the fates of these characters intertwine—and where ordinary people become heroes, and their lives become legend.