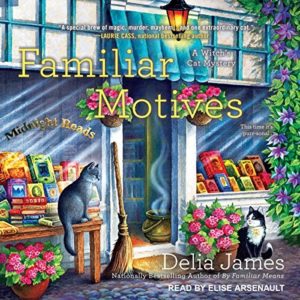 I continue to enjoy the Witch’s Cat Mystery series.  The combination of Ms. James’s words and Ms. Arsenault’s voice create a delightful Mystery audiobook a la Hallmark. This latest whodunit was gripping and fun.

Though I’m starting to fear that Anna is a long lost relative of Mrs. Fletcher and no one should want to be near her (okay, this horribly dates me but I loved Murder She Wrote as a child), Anna’s genuine kindness more than makes up for the murders that seem to occur around her.  In this book, Anna’s veterinarian is unfortunately murdered while cat-sitting the town’s famous feline: Ruby (aka Attitude Cat), the spokes-cat for the Best Pet Store cat food, treats, toys etc. line.  Unfortunately Anna and her friend (and fellow coven sister) Kenisha find Ramona’s body but are unable to find Ruby.  Between Ruby’s owners bitter custody battle, Attitude Cat’s publicist’s strange behavior, and Ramona’s own witch family’s strangeness, it was a guess who was the murderer and why.

I enjoyed how the story twisted and turned.  Though I was able to narrow down the why, the exact who was a surprise for me this time.  I liked how Anna was better at following rules and being safe during this investigation.  It was fascinating to watch and learn how difficult it is for Kenisha to be both a witch and a police officer.  She has to toe the line between the unexplainable truth and proof in the court of law.  I felt Anna was better at keeping her feet on both sides of the line and ensuring that Kenisha wasn’t left on the sidelines by the coven.  The relationships of the women are just as strong an element in this series as the clues.  It all contributes to the coziness of this mystery series.  Not to mention the slow burning romance between Anna and a certain young bartender.

I feel that no one but Ms. Arsenault could narrate this series.  Her voices and personality truly bring the characters (both human and furry) and this world in Portsmouth, New Hampshire, to life.  I enjoy the audio so much, I prefer to listen to this series, rather than read it.

I eagerly look forward to the next story in this series.  If you enjoy cozy mysteries with a dash of magic, this would be a great series to pick up.  For those that enjoy a series that can easily be listened to while driving, exercising, or doing chores, this is an audiobook series to pick up.

My Ratings:
Story: A-
Narration: A
Overall: A

After learning that she comes from a family of witches–and adopting a familiar named Alistair–artist Annabelle Britton has made beautiful Portsmouth, New Hampshire, her home. Together with her coven, this good witch is trying to put a stop to magic and murder most foul.

When Anna takes Alistair to see local veterinarian Ramona Forsythe, they meet the most famous cat in town: Ruby the Attitude Cat, spokes-feline for a pet food brand. But then Ramona turns up dead, and Ruby goes missing. It seems like the murderer used magical means, so it’s up to Anna and Alistair to catch a killer and cat-napper as only a canny cat can.