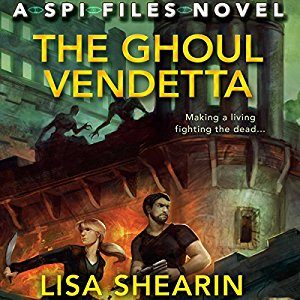 SPI agent Makenna Fraser points out that bad stuff always seems to happen around her, and she’s not kidding. The Ghoul Vendetta opens with Mak and Goblin Lord Rake Danescu on a yacht in the Hudson, along side several of the supernatural world’s bigwigs, when it is attacked by a kraken and other sea creatures. What is even more strange is that no one is hurt and everyone is left alone as soon as their target, a vampire mob boss, is kidnapped. Soon after, a familiar foe turns up, robbing banks and threatening Mak’s partner, Ian. Now it’s up to SPI to find the connection and stop a terrible enemy.

As a fan of the SPI Files from the beginning, I am sad to say that The Ghoul Vendetta held several issues for me. First, I was disappointed that the first five to six chapters are almost entirely review of the previous three books; explaining the world and highlighting major events. I appreciate that the author takes care to do this, but by the fourth chapter, I was ready for things to move forward. And once again, throughout the book, there is so much repetition. Mak will remark on who a character is or what they like or do a more than once in the book.

Another issue I’m struggling with is the relationship between partners Mak and Ian. Yes, I was disappointed when the author chose to keep Mak and Ian platonic friends, but I was glad to see she gave them each a love interest. After the conclusion of the previous book, I was looking forward to seeing Mak and Rake together. However, for much of the book, the story once again focuses on how close Mak and Ian are – but how they are only friends. I’m not buying it. Mak shows way more affection for Ian than her supposed boyfriend, Rake. If the author wants me to buy into the “just partners,” and view Rake as a love interest, then she needs to invest time in the romance. There was some of this in the last parts of the The Ghoul Vendetta, but honestly, it felt awkward and out of place since we really haven’t seen Rake and Mak together other than a few casual dates, or working in life and death situations. We know more about Ian and Kylie’s romance than Mak and Rake.

Sadly, I never really got past these two issues, so it was difficult for me to get into the overall story, which has some extremely interesting aspects. I appreciate that the author works to tie together several threads from the previous books. I liked the tie-in with Ian, and was left wondering what will happen next (in a good way). I just felt like there wasn’t enough emphasis on this part of the story after the continuous mention of so many previous events.

One bright spot in listening to The Ghoul Vendetta is the narration by Ms. Parker, even when I bumped up the listening speed 1.5x. I love listening to Ms. Parker’s Mak, repetitions and all. She has a lovely southern accent that is fitting for the tough yet “weaker” character of Mak. Ms. Parker’s male voices are good, but tended to blend a bit (Ian and Rake), and I felt that her performance of Alain Moreau has changed slightly-a bit more dramatic of an accent, yet I still enjoyed it.

In the end, I had real difficulty getting beyond the constant rehashing of past events and the constant repetition within the story. It diminished what should have been an engrossing storyline and frustrated me to the point where I had to speed up the playback to get though it more quickly. With that, I still recommend The Ghoul Vendetta to fans of the SPI Files, and I hope that the next title will be tighter, stronger, or I fear I may drop the series.

My Rating: C
Narration: B+

The agents of Supernatural Protection & Investigations (SPI) are paid to keep the peace. But that’s not so easy when an endless evil threatens to tear that peace to pieces…

A vampire gangster’s nephew is abducted off his yacht by a bunch of low-rent Creatures from the Black Lagoon. A slew of banks are knocked over by what looks like the cast of Night of the Living Dead. All of this may seem like the movies, but, I promise you, it’s not.

I’m Makenna Fraser, seer for SPI, and I know the culprits aren’t wearing disguises or makeup. They’re real. Deadly real. Especially their leader—an ancient shapeshifter who leaves a trail of chaos and blood in his wake. Now, he’s taken my partner, Ian—and his intentions aren’t pretty.

The worst part? This is only the beginning…

The beginning of the end of the human race.